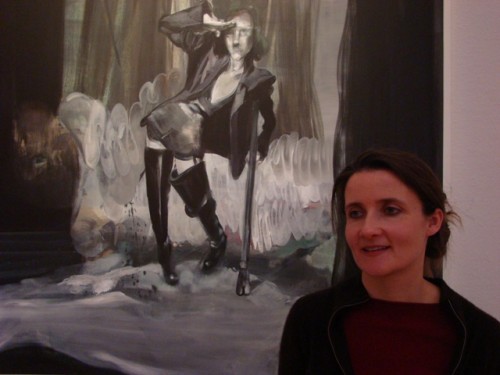 Accrochage [Vaud 2010] the eighth annual exhibition devoted to the contemporary art scene in Vaud  prefers seduction to outrage this year. The jury-chosen works mark a sharp return to figurative and narrative art, including in video . Elisabeth Llach, laureate of last year’s edition, presents a solo show within the exhibition. Her paintings explode with sexuality, innocence and unfinished stories.

“This year’s edition of Accrochages is surprisingly classic” says Bernard Fibicher, the Lausanne fine arts museum director, who was not part of a changing jury that includes art professionals from all over Switzerland.

“Whether it is due to the composition of the jury, or reflects a general trend, I notice that there is nothing wild or crazy this year” Fibicher tells Swisster.

Accrochage [Vaud 2010] is a distillation of 34 works chosen from nearly 600 paintings, sculptures, drawings, photographs, videos and installations that represent the recent output of more than 230 artists born in Vaud or who live in the canton.

“But this year, we don’t have any photographs or installations” the director observes.

The jury has come up with a selection that is surprisingly homogenous, not in style – there is nothing remotely similar between the pastiche-like figures of degenerate royalty by Stéphane Zaech (1966) and the Leonardo-like fluorescent sketches of biblical scenes by Claudia Renna (1965), but because “prototypes of art history”, as Fibicher indicates, seem to be infiltrating today’s art.

“I see this as a direct consequence of the influence of the new German school of painting” Fibisher points out. There is a growing consensus that the Leipzig school in East Germany that remained apart from conceptual and abstract mouvements when the Iron curtain was still up is part of the explanation of this influence.

“We might also be witnessing a form of artistic sobriety in response to the economic crisis” he adds.

This year’s Jury Prize was awarded to Berlin-based Pauline Boudry (1972) whose video “Charming for the Revolution” (2009) with a feathered monarch in a field of high voltage pylons serves as a tribute to Jack Smith, recognized as the father of American performance and trash art (1932-89) and who had a huge influence on Andy Warhol.

Pauline Boudry, with Renate Lorenz, Charming for the revolution, 2009, video, courtesy the artist

Although agreably arresting, the video lacks the abrupt impact of Anne-Julie Raccoursier’s  work, the 2007 winner, who creates images that enter into our minds never to leave again. ‘Crazy Horse’ in this year’s edition shows a larger-than-lifesize purebred horse on a treadmill.

Nicole Schweizer, the museum’s contemporary art curator, succeeds the almost impossible task each year of creating a harmonious exhibition out of a disparate body of works.

She observes that the pieces in this edition seem however “to share a running theme of grappling with reality through devices such as distanciation and dispacement as proposed for example by the engraved monumental stamps from his country by the Chilean Cristiàn Valenzuela, or through theatralisation as in the case of Pauline Boudry’s video” Schweizer explains.

Each edition of Accrochage also includes a solo show by the winner of the previous year.

The Jury Prize winner in 2009, Elisabeth Llach (1970), says that this is the first time she has created an exhibition for a given space. “Artists don’t usually worry about external factors when they work, but in this instance I was constantly thinking of the venue” she says with a sweep of the hand to indicate the museum’s enormous central cavity.

“I wanted to create something theatrical in response to the nature of my work” she specifies.

A pool of mysterious lighting and music greets the visitor in an atmosphere gentle like the dawn of day. But there is nothing mellow in Elisabeth Llach’s observation of women, usually the only actresses of her disquieting scenes.

‘Alles wird gut – Tout ira bien’ (Everything will be fine) is the name chosen by Llach as a self- realizing prophesy that she wishes upon us all.

The exhibition presents  distinct series of works, all painted in acrylic by Elisabeth Llach directly on paper, ranging from small spontaneous sketches to more elaborate frescoes a meter and a half tall. The successive layers of paint give the larger formats a phenomenal  depth.

“I want people to remember that nothing is acquired for life. When I paint scenes that can be considered disturbing, I try to do so with lightness and an element of humor” she explains. 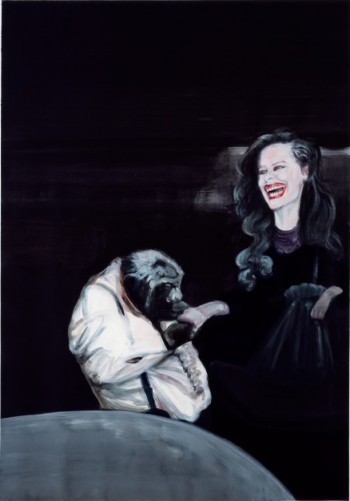 The high level of sexuality of often naked  women stretching, spinning, grasping and crouching in their frames are tempered by Elisabeth Llach’s  gentle exuberance and intense theatricality.

“I like to leave something unfinished in my paintings, so that everyone can go away with their own story” she discloses. 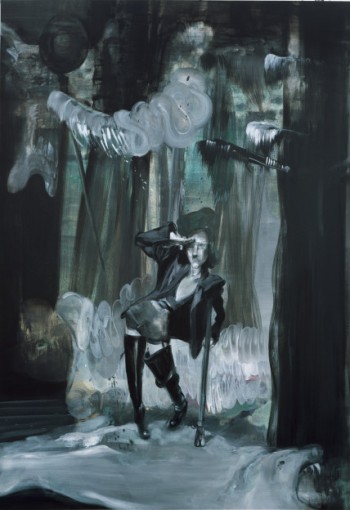