The exhibition ’100 masterpieces from the Städel Museum’ in Frankfurt on loan to the Hermitage Foundation in Lausanne has some wonderful art to show, but somehow the exhibition hasn’t got it quite right. Exquisite works by French impressionists are joined by superlative paintings by German expressionists, but the rest of the exhibition appears disconcertingly formal and hybrid.

The hundred paintings from the famous collection of the Städel Museum, on show at the Hermitage Foundation in Lausanne until May 24, offer a panorama of 200 years of some of the finest German painting, with parallel examples from other schools of art and some absolute masterpieces.

“The Städel is the oldest and most important private cultural foundation in Germany.” says Max Hollein, the museum director, adding that its art collection “is one of the most interesting and prominent ones in the country”.

Founded in 1815 by the banker and spice trader, Johann Friedrich Städel, the museum has remained private, one of the few in Germany, according to Hollein, where the art is “collected by citizens for other citizens”.

The Hermitage Foundation has been able to secure a selection of some of the Städel’s best pieces while the museum in Frankfurt undergoes a vast expansion plan. It is building a new wing dedicated solely to modern art.

Works on display in Lausanne range from the collection’s nineteenth-century treasures, including Tischbein’s universally known portrait of Goethe (so well-known that some visitors – including Andy Warwhol in his time – pop in only to see it) to modern art visionaries Picasso and Max Ernst.

Neo-classicism, realism, impressionism, symbolism, the nabis and expressionism are all covered in the exhibition in what must be a museum guide’s nightmare, but an art historian’s delight.

“Drawing private or public collections to Lausanne that are rarely seen outside their country has become a tradition at the Hermitage,” says Juliane Cosandier, the Lausanne museum’s director. “I am also pleased to have the opportunity to introduce our public to the German school of painting,” she underlines.

Whereas exhibitions at the Hermitage are usually blessed with what is commonly referred to as the “Cosandier touch”, with an almost musical lightness to the spaces and a discernable harmony between the paintings, it has to be said that this exhibition appears disturbingly flat, no doubt because this time Cosandier did not curate the show.

By placing the prize French Impressionists, Manet, Degas and Renoir at the beginning of the exhibition, splitting the Symbolists between floors, dispersing examples of neo-classic or romantic German painting amongst the French realists, relegating Klees to a small cell, the impression is not one of a homogenous collection, but of a pictorial patchwork.

In fairness, the smallish rooms of the former residency do not always allow an imaginative approach, but showing side by side Cézanne’s Mountain forest path and Erich Henkel’s (see below) Holstein landscape might have allowed for the kind of dialogue between works of art that the Hermitage usually highlights.

That is not to say the exhibition is not worth the visit, far from it. Some of the paintings offer new perspectives on well-known painters, for example the late nineteenth, early twentieth century French painter, Pierre Bonnard whose Reclining Nude is unusually structured, or two Monets that reveal the early, more formal style of the later author of the Nympheas (not shown). Edvard Munch’s Jealousy is unusually populated with three figures. 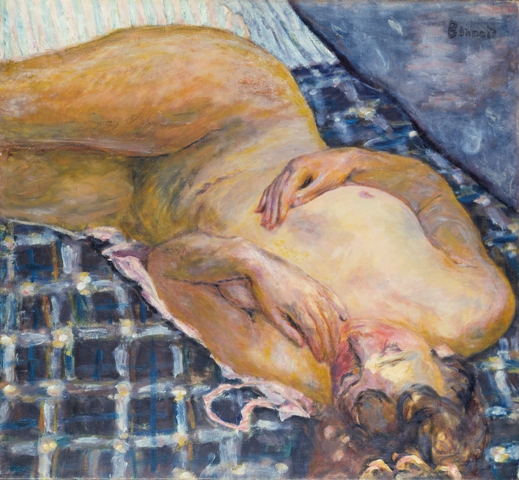 And prepare yourself for an artisitc coup de foudre that comes from the modern gallery added to the Hermitage only a few years ago, where a stunning sampling of German expressionism with its jubilant colours and bold strokes comes as a welcoming surprise.

Under the expressionist label, works from the Die Brücke (The Bridge) formed in 1905 by Eric Heckel, with Ernst Ludwig Kirchner and Karl Schmidt-Rottluf, who were later joined by Emil Nolde, present striking similarities with the French contemporary movement of that time, the Fauves, so named because of their use, inspired by Matisse, of saturated colours. 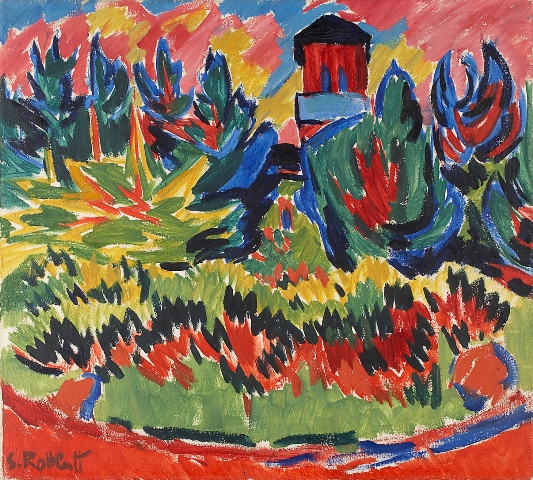 A few years later, Der Blaue Reiter (The Blue Rider) was founded in 1911 by Wassily Kandinsky, Alexej von Jawlensky, Franz Marc and August Macke but came to an abrupt end when Marc and Macke were killed in combat during the First World War, fighting against France, the country with which, before the war, the maintained strong artistic contacts.

Needless to say, the joyous expressionist art mouvement did not survive the wars.

The exhibition ends with a remarkably series of paintings by Max Beckman, some of which have never been shown outside of Germany before and that introduce us to the German painter’s ecclectic and personal style.

Interesting examples of sculptures by Laurens, Maillol and Rodin complete the collection.

The fact that the Städel Museum continues to be a private institution and receives a third of its collection from private collections no doubt explains the somewhat anarchic content that is on display in Lausanne, although the quality of the ‘masterpieces’ overrides this drawback.

After Lausanne, the exhibition travels to the National Gallery of Victoria in Melbourne, Australia (June-October 2010) and the Museum of New Zealand in Wellington (November 2010 – February 2011).