Yet another Gerhard Richter exhibition sees the day, but the one at Beyeler Fondation in Basel is different. Celebrity curator Hans Ulrich Obrist brings to light the artistic schizophrenia of Germany’s most revered artist in a way that suggests that it may be the key to his success.

Article published by http://www.swissinfo.ch on 27 May 2014 (links in nine languages at end)

Only a handful of contemporary artists command the world attention and delirious prices of the 82 year-old artist. Richter repeatedly breaks the record of auction prices for a living artist and clocks up the highest number of lifetime exhibitions.

Trim and compact, with clear-framed glasses, Gerhard Richter sauntered into Beyeler with a look of cool detachment. He was about to face the press that descended onto Basel like a pack of hungry wolves.

When Beyeler Director Sam Keller announced: “Gerhard Richter is the most influential artist of our time”, the artist remained politely aloof. When Keller added that no other contemporary artist needs another exhibition less, they both turned their heads to the curator.

Hans Ulrich Obrist, who engaged in an on-going dialogue with Richter 27 years ago, when he was still a teenager, explained how he had convinced the artist to come to Basel by proposing to bring to the surface the themes that had not yet been explored.

Branded the most important curator of his time, Obrist has kept, against all expectations, the contagious enthusiasm of a child and the long-limbed lankiness of an adolescent. He speaks four languages fluently and when he does, he rarely comes up for air. Hear podcast interview.

He told Swissinfo.ch that curating is always a question of dialogue. After “long, long hours of discussion”, Richter and he settled on the idea of illustrating how cycles and series, as well as an awareness of spaces, traverse his work.

When an artist explores so many techniques and expressions, as Richter has over 50 years, he is bound to confuse. He may even appear inconsequential. Here, after all, is an artist who has built his reputation on photo-paintings, monochromes, blurred subjects and smeared paint, not exactly what one would consider great art.

But the reconstruction of the series that have characterized Richter’s oeuvre and their presentation together, on the airy walls of the Renzo Piano building, several for the first time, make for a remarkable exhibition: the coherence between works that could very well have been made on different planets comes to light.

Asked why he considered that it was the most beautiful show to date at Beyeler, Sam Keller told Swissinfo.ch: “The exhibition is touched by the hand of the artist. It is as much a work of art as anything that Richter has ever made”.

It is not so much that the art fascinates (it doesn’t always), than the way it has been displayed. Each room tells a different story.

Eight Student Nurses (1966) from Richter’s early photo-painting days, the year the horrific murders took place in Chicago, face the succession of dissolving figures in the Annunciation after Titian (1973): bleakness and hope together (see above).

The 12 tall Wald (2005) on loan from MoMA (New York Museum of Modern art) create a cathedral-like feeling of religiousness.

The Bach (1992) series, that belongs to Moderna Museet, Stockholm, delivers a sense of harmony and peaceful joy, whereas the 15 pictures from October 18, 1977 (1988) on the Baader-Meinhof gang, create the impression of walking into a morgue.

As for the main gallery, it defies gravity: the presence of a massive, but ethereal, glass sculpture entitled 12 Panes (Row) 2013 lifts the room. It is placed between six monumental Cage (2006) paintings that face the six red Abstract Painting, Rhombus (1998) made for a Renzo Piano chapel that was never built. It feels like the entire room is floating out into the garden. Richter’s preoccupation with the relationship of art to space could not be better illustrated.

But the true magic touch throughout, the one that makes this exhibition stand out, are the small, figurative paintings of irresistible charm that break up the series and for which Richter is perhaps best known. Obrist calls them counterpoints, borrowing the term from music, which plays a large part in Richter’s inspiration. 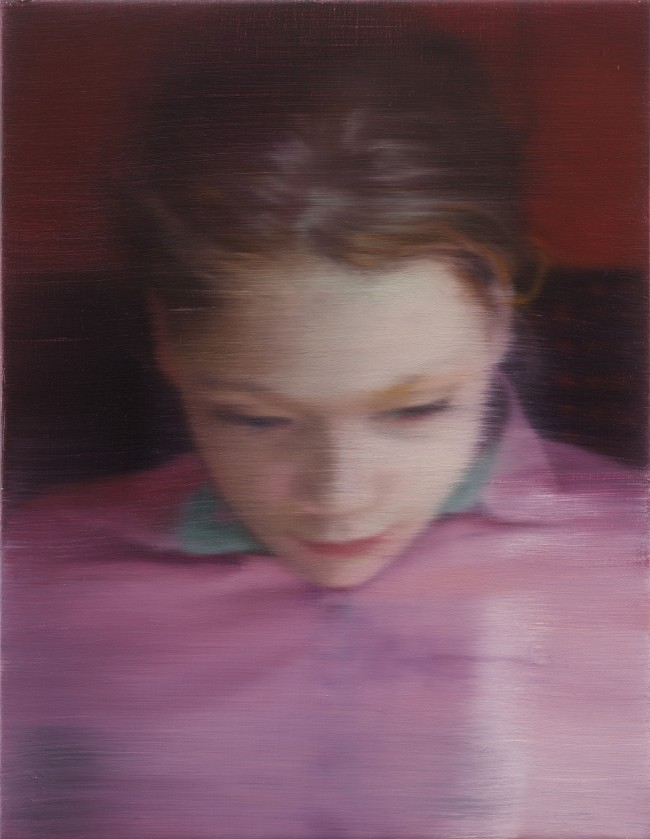 “All things of quality have a timelessness,” Richter said in an interview on the occasion of his exhibition at the Tate. “Paintings show what isn’t there.”

The hallmark smudges and out-of-focus contours indicate a sense of urgency, as if Richter was attempting to dissolve time when allowing the figures to disappear.

His latest foray into printed digital art (Strip, 2013) is on the same principal of dissolution, Obrist indicated, because the Pantone colours of the earlier 1024 Colors (1973) have been digitally stretched.

Along with the splendid 4900 Colors (2007) that fill en entire room, these works pose the question of the status of art when it is not fabricated by the artist at all. And yet, Richter does not have a Warhol-like factory and is only helped by two assistants and a studio manager, Obrist assures us.

For an artist at the pinnacle of the art market, Gerhard Richter is unusually scathing of contemporary art. “Art is in a process of transformation,” he said at the press conference, adding later on: “70% of what is out there is junk (schrott).”

There are no longer criteria to judge masterpieces, he explained. The canons of the past, which allowed the quality of a work of art to be judged, as in the case of Mona Lisa, have disappeared.

The point Richter makes may apply to his own work as well, because it would be difficult to identify any of the paintings in the show as masterpieces, other than the iconic figurative works by which he is defined, and adored, such as Betty (1988), Reader (1994) and Ella (2007). 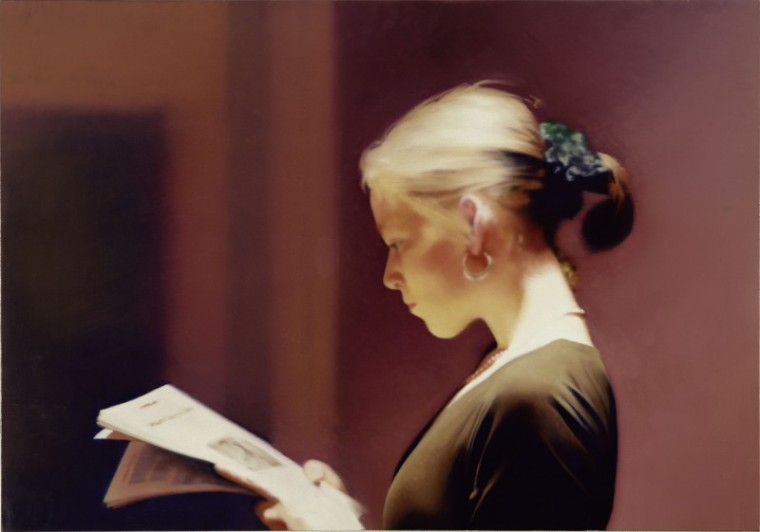 Nor does there appear to be an underlying message, because even his Red Army period came 11 years after the gang terrorized Germany and was never followed up with any other political manifestations.

Instead, his explorations, some would even say his schizophrenia, have ensured his place in the pantheon of art heroes. Perhaps that is what the new canons have become, the ability of an artist to be a mirror of his time, endlessly embracing the potential of new techniques.

And remaining an enigma that vanishes into his own art.

He was asked in Basel what he thought about the astronomical sums being spent on his paintings. Richter admitted that it pleased him and added, amused, that rich people die too: the paintings they buy may well end up in museums some day for everyone to see.

Gerhart Richter was born in Dresden in 1932. He escaped East Germany when he was 29, after studying at the Dresden Academy of Fine Arts, where he learned mural painting.
He moved to Dusseldorf in 1961 where the next year he formed a lifelong friendship with Sigmar Polke (1941-2010), also a former East German. He now lives in Cologne.
In 1964, he started his photo-based paintings and had his first solo exhibition.
Since then, according to the recently published Artindex 2014, Gerhard Richter has accumulated the largest number of lifetime exhibitions (1,256), ahead of Bruce Nauman (1,244) and Cindy Sherman (1,006).
In 2011-12 a major retrospective entitled Gerhard Richter: Panorama travelled from Tate Modern in London to Neue Nationalgalerie in Berlin and then to Centre Pompidou in Paris. The Beyeler exhibition is said to be incomparably brighter.

Born in Zurich in 1968, Hans-Ulrich Obrist is Co-Director, with Julia Peyton-Jones, of the Exhibitions and Programmes at the Serpentine Gallery in London. He has curated more than 250 exhibitions since organizing the first one in his kitchen in 1991 at the age of 23 when he was still a student in St Gall. Christian Boltanski and Peter Fischli & David Weiss were among the presented artists.
Obrist is the author of The Interview Project, an extensive ongoing project of interviews.
On top of the yearly programme at the Serpentine Gallery that includes 10 exhibitions and an onsite temporary summer pavilion designed by the world’s greatest architects, Obrist uses his weekends for outside projects. So far in 2014, he has:
–      curated an exhibition in Doha with the Israeli artist, Etel Adnan.
–      contributed to the Solaris Chronicles as part of the core LUMA group set up by Maya Hoffman for her foundation in Arles, which will soon be housed in a Gehry building.
–      curated the major Gerhard Richter retrospective for the Beyeler Fondation.
–      curated the Swiss Pavilion for the Venice Architecture Biennale (7 June-23 November).
–      curated 14 Rooms for Art Basel (14-20 June).
In the meantime, Marina Abramovic’s new 512 Hours project will be launched at the Serpentine Gallery on 11 June, along with an Ed Aitkins exhibition, then on 26 June, the summer Serpentine pavilion by Smiljan Radic will be inaugurated.
Link: Serpentine Galleries for programme