Paul Chan, a New York-based artist born in Hong Kong, has been invited by Schaulager in Basel to transform the Herzog & de Meuron building into a pathway for his own fantasies. His Chan Wonderland is grim, gritty and graphic. It is also celestially erudite and disarmingly immature.

Only 40 years old, the protean Paul Chan is known for his videos, installations, paintings, drawings and books, an oeuvre from which he has extracted the selected pieces that make up the Schaulager exhibition. Four years in the making, the show that runs until 19 October 2014 redesigns and reconfigures the Basel spaces. Welcome to Paul’s world.

The dive into Chanland is an immediate one: we are greeted by playful little cartoon figures, little girls in bobby socks and pale poplin dresses. But look carefully; Chan is already taking us for a ride. The little girls in To all the girls I have drawn before (after Happiness) 2002 are anything but innocent: we have been plunged into the troubled obsessions of Henry Darger, the reclusive American whose secret world of under-aged nymphs cavorting in gardens was only discovered after his death.

Chan does not spare us. Limbs are a-fling, some of them sectioned, others growing out of places where they shouldn’t be. We are entering head first into the orifices that Chan parades as the hallmark of his inner workings. He is here to show us that genitalia are an extension of our minds.

And just to make sure that we understand that he is not joking, and to lend intellectual gravitas to his endeavours, he has wrapped the little girls into the parcel of the Table of the Progress of Social movement by the early 19th century utopian socialist Charles Fourier. References to the 2nd Septageneric creation or the Seven harmonic creations adorn the wall.

We then travel to an open cemetery and broken statues, all drawn with the disturbing precision of the girl figurines, but without the pastel colours, of course. A keyboard in the corner, with keys that have been transformed into tombstones, is ready to spring into action, as if to conjure death. Is Chan being grave or funny? Is this his way of mocking death itself after taking bodily functions so seriously?

Paul Chan (b. 1973) was not yet 30 years old when he made the animated video Happiness (Finally) After 35,000 Years of Civilization (after Henry Dager and Charles Fourier) (2000-2003) and it shows. The explosion of images that shift stiffly across the screen are reminiscent of the first programmes used by children in the early 90s to create their own Magic Theatres. But with Chan, who was also a video game generation child, we are not spared massacres, eviscerations, rampage, blazing horrors, while priests glide sweetly by.

Chan uses music well; it is so craftily integrated into the work that it appears to come from within our own heads. But in fact, it acts in anticipation of the mood and message of the next unsparing scene.

A white dove fights the wind. Spring is about to arrive. We would like to find this poetic, but it cannot be: danger looms and we are about to be jarred again.

Contrary to traditional video art, Chan’s moving image art does not gangrene time. The progression is oddly arresting, compelling and powerfully disturbing: evil and innocence are vying simultaneously for our aesthetic emotions. There are even glimpses into unbridled pleasure to the sound of a Bach partita and perhaps (I’m not sure) into a sense of irony as suited businessmen go bustling across the screen with their mobile phones stuck to their ears.

When Chan lets go of his frenetic imagery, he is capable of producing pools of loveliness. He calls them his Shadow Sonatas. In the work cycle of The 7 Lights (2005-2007) he has set aside his westernized intellectual pretentions and allows us to enter a gentle swaying of shadows and light. This is where his Asian origins take us places where we haven’t been before. An entire room is nothing but a shadow play of light falling onto a wooden floor. Birds fly across never settling on the silhouette of a telegraph pole. And then we start all over again. Time expands, but it is trapped in a loop as well.

We have left behind the troubled times of humanity and then wander through constructions of paper, styrofoam, coal and light. Chan, the puppet master of light, massages the shapes and shades of black & white as if to bring us peace at last.

Hey, what is happening here?

But the peace is short-lived. Chan throws us suddenly into the world of hawks battling doves as befits the political ruminations of a young man in his adopted country. In 2005, after Chan completed his degrees at the Chicago Art Institute and Bard College, the US was still at war with Iraq, which he had visited at the outbreak of the war.

We have entered the Empires of the Senseless where Saddam and George W. Bush are the emperors and Samuel Beckett stands guard.

“The question of democracy is an extremely complicated one,” Saddam Hussein confesses.

By the time we get to My birds… trash… the future (2004) the same images of dooms-land, deflagrations and erections have grown tiresome.

What is so disturbing about Chan is the patent sincerity of his activism, his need for cerebral provocation and physical excesses. But let’s face it, this is still just art, so who is he trying to convince?

To get to the second layer of the exhibition, on the ground floor, we wander past an entire wall of eviscerated books. From Babar, to Who’s Who in Medicine, from Broadway musicals to Ancient Egypt, Chan the publisher is making a statement about … books!

More than 1’000 book covers are doctored by pictures by Chan. Where does he get his unwandering focus to accomplish such a huge and beautifully useless endeavour? 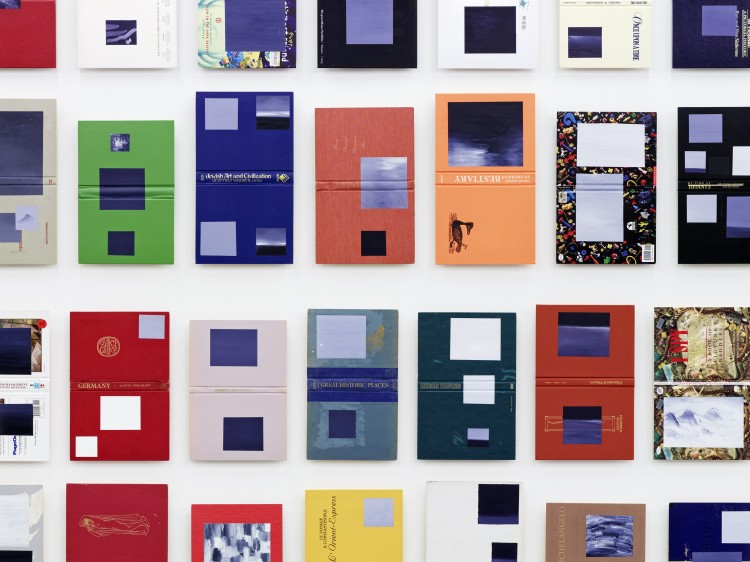 The entire second section of the show could very well be a metaphor for the male member. I don’t mean this in a mocking way, but as an amused observer. Floors and walls are strewn with plugs and make-believe sockets. Plugs, after all, plug and are plugged. Projectors, after all, project.

I remember seeing the infamous Sade for Sade’s Sake at the 2009 Venice Biennale, which was brilliantly curated by the same Daniel Birnbaum who served as the artistic advisor to Chan for the Schaulager exhibition and who is otherwise Director of the Moderna Museet in Stockholm (see their compelling «Artist’s Talk» 13 April 2014 )

It wasn’t the joyless and brutal shadow fornication that dismayed me so, it was the fact that the female silhouettes looked African.

The day I visited Basel, a father was touring the show with his four-year old child. There was enough imagery in that film to put anyone off sex forever.

“The pleasure of working at Schaulager is that I didn’t have to treat my material in a dignified manner,” said Chan. I see what he means.

But if anyone believes that Paul Chan doesn’t have a sense of humor, as I did, this show may prove them wrong.

The Schaulager in Basel is one of its kind: a research, storage and restoration centre dedicated to art, some of it (very) contemporary. It never organizes more than one exhibition a year. This year Paul Chan follows in the footsteps of Matthew Barney in 2010, Francis Alÿs in 2011 and Steve McQueen in 2013.

Opened in 2003, Schaulager (which combines the words to show and warehouse) is the brainchild of one of the descendants of the founder of the Hoffman-Laroche pharmaceutical empire. Maya Oeri shares with several members of her extended family a dedication to the arts that has transformed the art scene in Switzerland and abroad.

Maya Oeri, who also serves on the board of MoMa in New York, is not exactly what one would call an art wallflower. She demonstrates a daring that would be akin to recklessness, had money been an object. This lady knows what she likes and she knows what she is doing.

Since 2003, Schaulager has, on the one hand, rocked the art world with exhibitions of wild adventurousness, and on the other, provided a safe haven for the world-class art collection started by Oeri’s grandfather, Emmanuel Hoffman, as well as many other pieces acquired over the years “with an eye on the future”.