The Collection de l’Art Brut in Lausanne, the first museum dedicated to outsider art, launches a Biennale on themes that reoccur in the obsessions of their reclusive artists. It inaugurates the cycle with Vehicles to display 200 objects from its own collection of 63,000 pieces, a display that is pertinent, powerful and playful. 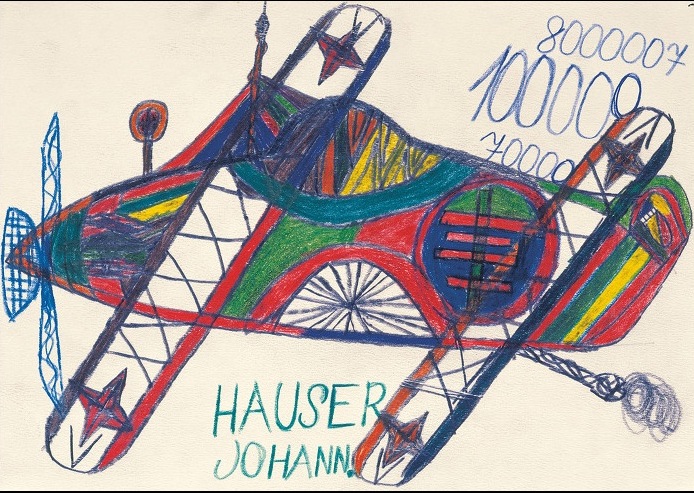 “Museums and galleries dedicated to art brut are springing up all over,” said director Sarah Lombardi at the opening. “It is our duty to remain an international reference point by reaffirming the identity of our museum and showcasing the works of our huge collection.”

Jean Dubuffet, who coined the term “art brut”, laid the foundations of what was to become the renowned Collection de l’Art Brut thanks to the donation of his own collection of 5’000 works.

The Collection now confronts a growing appetite of the art market for the creative output of individuals who never meant to become part of the art world.

Out of deference to these individuals, whose status as artists is almost accidental, the Collection refers to them as authors.

Francis Mayor (1904-1995): In memory of ‘Major Davel’, from around 1990, painting and collage on paper. Photo : Olivier Laffely, Atelier de numérisation – Ville de Lausanne, Collection de l’Art Brut, Lausanne Born in Lausanne to a single mother who tried to rid herself of him, Mayor lived his adult life first at sea and then working on Lake Geneva. The main themes of the collages that he made when he moved to an old person’s home were the sea, boats and religion.

Coming from individuals who were trapped in their inner minds and rarely moved themselves, the theme is pertinent, powerful and playful. It also allows for a very attractive and entertaining display.

Willem Van Genk (1927-2005): Tube Station, 1970, collage and painting on wood Born in the Netherlands, Van Genk was a misfit who had travelled extensively before ending up in a workshop for the mentally challenged and beginning to produce complex cut-outs and collages.