The global ambitions of Art Basel

The global ambitions of Art Basel

Art Basel opens in Switzerland following the launch weeks earlier of its first Asian edition in Hong Kong. With Art Basel Miami Beach now in its tenth year, swissinfo.ch looks at the brand’s expansion and how experts view the change.

Article published by swissinfo.ch on 12 June 2013 in the following languages (links)

Around Art Basel (only in English)

When Art Basel bought out Art HK two years ago, it injected into the fledging fair the Swiss management style and expertise needed to turn it around. Greater rigour in the selection of galleries and an airy display have resulted in a high level of acclaim for this first edition, although sales were reported to be slow.

“Hong Kong is a symbol of the vitality and dynamism of Asian markets. We have followed our art clients there,” David Saillen, managing director of Axa Art in Switzerland told swissinfo.ch, in appraising the expansion.

“It’s like a springboard into different cultures and different ways of looking at art.” He was impressed by the amount of Asian art in the Swiss-run fair.

Of the 245 leading galleries from 35 countries present at Art Basel Hong Kong (compared with 300 at Art Basel in Switzerland), over half were from Asia.

This figure includes the numerous blue-chip European galleries, such as Gagosian, White Cube, Perrotin or Lehmann Maupin that have opened outposts in Asia in recent years, as well as the entire Indian continent and Australia. “We cannot overstate the importance of that market,” Saillen observed.

According to art economist Clare McAndrew, China alone accounts for 25 per cent of the global art market, up from five per cent in 2006. “It’s an economic reality,” said Saillen.

“Every major art collector from Asia was in attendance,” Nick Simunovic, director of the Hong Kong branch of Gagosian, one of the world’s leading galleries, told swissinfo.ch. He believes the same would have been true of European collectors, had the Venice Biennale not come early this year and started only a week later (June 4), not to mention Basel following just after.

He considers that Art Basel is so good at what they do, that they have made “the fair-going experience better” and attracted a robust mix of collectors from India, China, Japan, Korea and Australia.

Simunovic pointed out however that Hong Kong lacked the frenzy of Basel and Miami where collectors arrive armed with the knowledge that allows them to make targeted purchases on the first day, if not in the first hours. 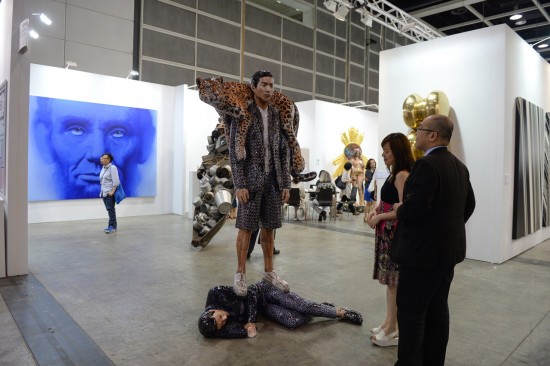 With the intention of breaking into a new market, a number of young galleries have taken the plunge with Art Basel’s eastern expansion.

Alexandra Staehli from Raebervonstenglin, a Zurich-based gallery that showcases new, often site-specific works by young artists, told swissinfo.ch: “Art Basel Hong Kong was perfect timing for us. The whole region of Asia could become very important for our art.”

She described with amusement how visitors with no interest in buying were nevertheless eager to understand the intentions of artists and how the artworks, especially the sculptures, were made. “This doesn’t happen elsewhere. I found their attitude very refreshing,” she admitted.

Although it functions primarily as a market place, Art Basel has, over the years, developed a variety of peripheral activities meant to reflect all areas of contemporary creativity. Simon Lamunière was in charge of Art Unlimited at Art Basel for many years, before taking the reins of Art Geneva.

Back from Hong Kong, he said that he found it striking how Art Basel has become a brand, with an over-riding identity that is stamped everywhere, much like Prada, when the fashion label opens a high-street shop.

He witnessed, however, how nationalities appear to work independently of each other. “They operate like national microcosms,” he said, with Americans selling to Americans, Chinese selling to Chinese and the Australian galleries selling to Australians.

Doesn’t that defeat the purpose of an international art fair, swissinfo.ch asked Florian Berktold, director of Hauser & Wirth, the renowned Swiss contemporary art gallery that has a showroom in Zurich, two in London and two in New York.

“In a global market, it takes time to learn to read the other’s art. But when the Art Basel branding kicks in, it creates much more media power and communication, and attracts more curiosity,” he answered.

In his opinion, the importance of art fairs has increased significantly over the past 20 years. “Art fairs are very attractive platforms for professionals to meet and to showcase important things, and for museum directors and journalists to discover them. They are also places to observe regional audiences.” 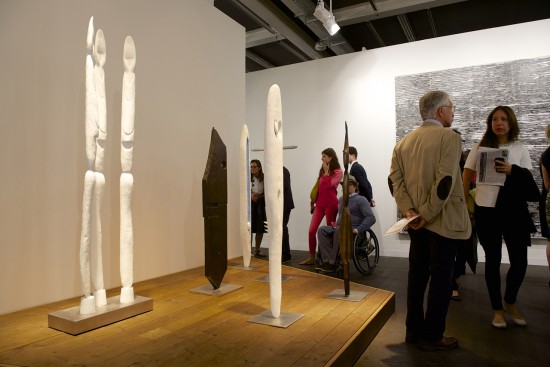 “Art fairs generate buzz and energy,” Berktold noted to explain why Hauser & Wirth, despite its own international clientele, is present in all Art Basel editions, as well as other prestigious international events. There are presently enough art fairs and biennales to fill a yearly calendar.

But not all galleries have the means to participate and many young galleries are suffering as a consequence. Some are even disappearing, which was the case recently in Lausanne, when the well-respected Gallery Lucy Mackintosh gave up the struggle after nine years.

Other galleries cannot access the official platforms despite numerous attempts: at Art Basel less than one in three galleries makes the grade. As a result, a plethora of alternative fairs takes place in parallel in Basel at the same dates, from June 10-16 (see infobox).

As its 44th edition in Basel gets off to a start, the question remains of whether by casting its net further afield, Art Basel will dilute its strength, or on the contrary, reinforce its global position, making it even more difficult for young, adventurous galleries to survive.

Art Basel is a constellation of different events under the same label. The 44th edition of Art Basel in Basel includes Art Unlimited, a platform for outsized artworks that will feature 79 artworks this year, the largest number of projects to date, Art Parcours, public artworks and performances by renowned artists and emerging talents, Art Features, curated projects or thematic exhibits, Art Basel Conversations, panel discussions with leading members of the art world, and Art Film, Art Basel’s week-long program of films by and about artists. 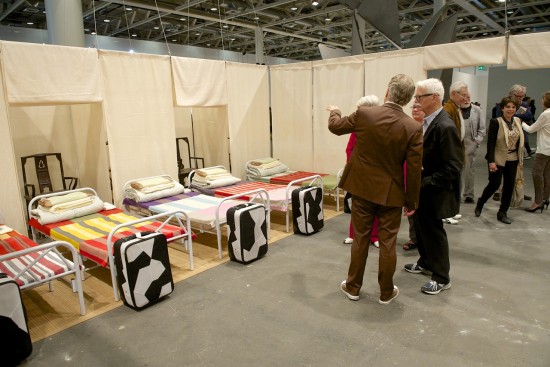 A stringent selection process means that out of 1,000 applicants, only 300 galleries are selected for Art Basel each year. To benefit from the concentration of an international art audience in the week of the official fair, satellite fairs take place at the same time.

LISTE 18 Art Fair Basel
Now in its 18th year, Liste was originally intended to showcase galleries that are no more than five years old and present artists under the age of 40. The rules are now more relaxed, but only 66 galleries from over 300 applicants have been retained this year. Because the jury is composed of curators, the selection is more conceptual than for the other satellite fairs.
Liste

THE SOLO PROJECT show at St Jakob’s arena was set up by Paul Kusseneers in Antwerp for other established galleries, most of them European. The display, in a hostile-looking concrete environment, is actually singularly effective as the visit winds its way through a labyrinth of powerful solo exhibitions.

SCOPE BASEL
Although an incubator for emerging work, Scope Basel is reputed for its elegance and sobriety. It features 75 exhibitors this year.

SWISS ART AND DESIGN AWARDS
Intended for graduates of a Swiss art or design college, federal prizes, presented for the first time together this year, are an interesting barometer of Swiss creativity.