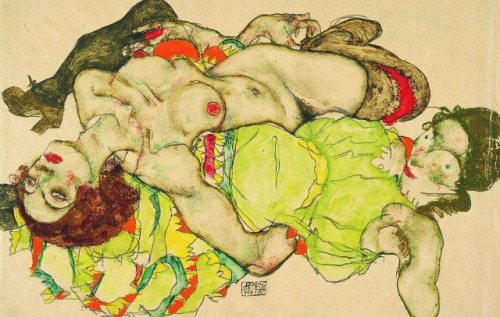 Vienna between 1900 and the outbreak of World War 1 was a microcosm of revolutionary ideas in art, architecture and arts and crafts.

Organized specifically for the Beyeler Foundation, the exhibition “Vienna 1900, Klimt, Schiele and their times”took more than two years to organize and presents works that have never been seen together before.

Curator, Barbara Steffen, says that her 15 years in the US with the Eli Broad Foundation in Los Angeles and the Guggenheim Museum in New York allowed her to return to Vienna with “the eyes of an American”.

“I didn’t want to mount just another exhibition on Klimt and Schiele,” Steffen tells Swisster. 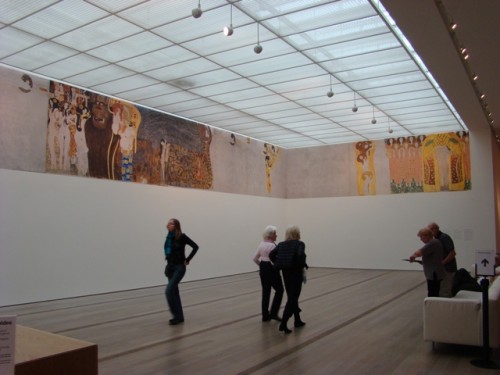 A replica of Gustav Klimt’s renowned Beethoven Frieze, painted in 1902 for the Vienna Secession greats visitors in the foyer of the Beyeler Foundation, photo Laird

“I realized that what was so remarkable about Vienna at the turn of the century was the liberty and freedom that came out of a violent rejection of tradition,” she says.

“I wanted to show that modernism, as it emerged in Vienna, with no difference between ‘high’ and ‘low’ art, was profoundly democratic.”

Running through the exhibition is the theme of “gesamtkunstwerk” (total art work), the idea that art can be the result of several disciplines together.

Both the Vienna Secession – founded in 1898 by painters, sculptors and painters, including Klimt – and the Wiener Werkstätte – modelled in 1903 along the lines of the British Arts and Crafts Movement and led by Koloman Moser, and Josef Hoffmann – contributed to this idea. 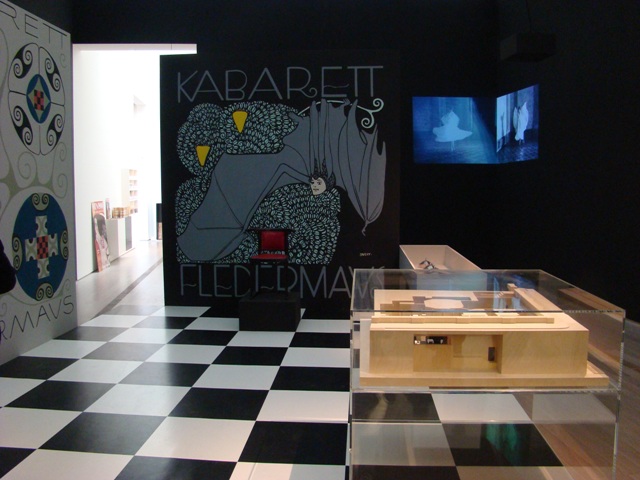 The cabaret Fledermaus, conceived by Josef Hoffmann (1870-1956), an outstanding example of an interdisciplinary work of art, is faithfully reproduced

“By defending the principle that there was only one art, the artists present in Vienna at that time upheld that there is no difference between the elevated art of painting and the utilitarian world of arts and crafts,” Steffen says to explain their close collaboration.

To illustrate this concept the exhibition includes 300 paintings, watercolours and drawings, a majority of them by Gustav Klimt and Egon Schiele, but also by the young Oskar Kokoschka, Richard Gerstl, and Arnold Schoenberg, presented alongside architectural models, furniture and decorative objects, textile designs, posters and photographs.

“At the centre of the Austro-Hungarian empire, Vienna exerted a pull on people not only from Bohemia and Moravia, such as Gustav Mahler and Sigmund Freud, but also from Prague, Hungary, Croatia and Serbia,” Steffen highlights.

“Between a sense of apocalyptic doom at the end of the old century,” she continues, “and the spirit of optimism at the start of the new, the fertile soil from which modernism emerged was formed.”

Both Gustav Klimt (1862-1918) and his pupil Egon Schiele (1890-1918) were to turn convention on its head when they produced a pictorial language that was revolutionary not only in form, but also in content.

Klimt was to spearhead the gesamtkunstwerk movement in the name of the Vienna Secession, of which he was the first president.

“We define the term ‘artist’ as broadly as the term ‘work of art’. We use it not only for those who create, but also for those who enjoy those capable of reliving emotionally what has been created and of appreciating it,” Gustav Klimt, explained in a speech at the opening of the Kunstschau Vienna in 1908. 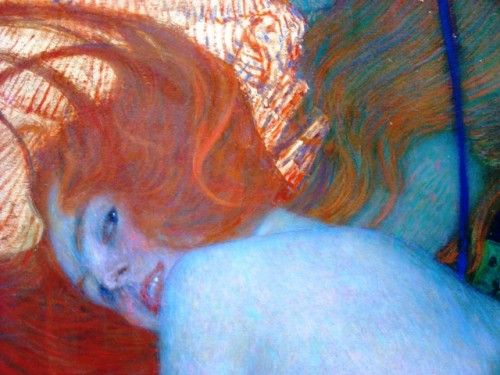 Samuel Keller, director of the Beyeler Foundation, played a key role in obtaining the loan of the works from the prestigious collections in Austria, Switzerland and the US.

He points out that Klimt’s The Dancer, on loan fromNeue Galerie, New York, not only exemplifies Klimt’s artistic attitude to women, whom he treats like goddesses or ‘femmes fatales’, but it also advances art in a new direction. 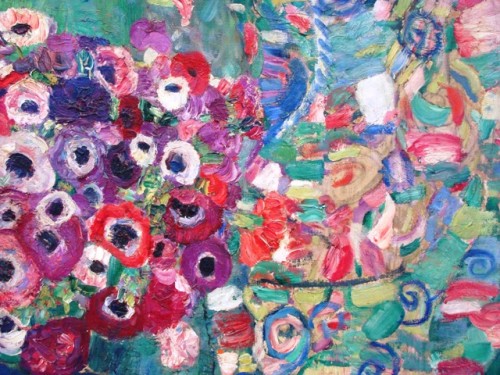 “The eroticism of Egon Schiele’s women is very different,” Keller says of the younger artist who is more closely identified with the nascent movement of Expressionism.

The exhibition presents 20 important paintings and more than 50 of the valuable and fragile works on paper by Schiele, most of them on loan from the Leopold Museum and Albertina in Vienna and Kunsthaus Zug, the repository of the Kamm Collection, the most prominent collection of works of Viennese Modernism outside Austria.

The 87 year-old Elisabeth Leopold was present at the opening, representing her recently deceased husband who is largely credited with having ‘discovered’ Egon Schiele.

Rudolf Leopold started collecting Schiele in the 40s when the artist was dismissed by critics as  a mere ‘local’ talent and his works were found to be pornographic or ‘degenerate’.

In recognition of his flair, the Austrian government contributed to transforming the Leopold collection in 2001 into a museum.

At the Beyeler Foundation a separate room is devoted to the sensual and explicit watercolours and drawings in which Schiele “transcends the theme of the nude to represent unprecedented aspects of sexuality”. 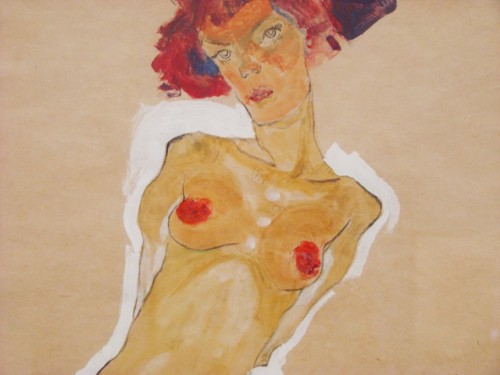 “His eroticism reveals deep and complex emotions, even melancholy or sadness. He wants a woman to appear in her nakedness first and foremost as a human being,” Keller says.

Schiele’s numerous self-portraits in the nude rival those of women and young girls in extreme poses (Schiele was imprisoned for three days for having used a 14-year old as a model), but whereas the women reveal their inviting vulvas, no drawing shows a man with an erection.

“Schiele was complicated and narcissic,” Steffen says. “Everything was about him and his psychological state of mind.”

But somehow, despite the overt explicitness of sexuality in his drawings, the impression remains movingly chaste.

Schiele died of the Spanish flu in October 1918 at the age of 27, three days after his six-month pregnant wife.

Klimt clung steadfastly to his defence of gesamtkunstwer until hedied the same year. The last period of his life was dedicated essentially to producing the portraits of women for which he is so well known.

But his life could have been very different, Steffen believes. “In my view, Klimt was a political artist who failed. He became discouraged and retreated into his private world when he realized that he was not getting his message across and his paintings were being returned to him.”

Klimt and Schiele remain the magnets for the exhibition, but the story that spans twenty years of one the most ground-breaking times in the development of art is well told and covers the work of the other artists who innovated in different ways.

The reconstruction of a cabaret and a room full of timeless furniture pieces are also highlights of the show.

“What they were saying was very important,” Keller stresses. “They were true revolutionaries.” 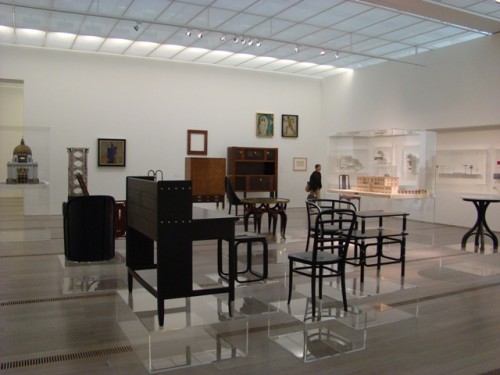 View of works that came out of the Werkstätte

Vienna 1900 – Klimt, Schiele and their Times

The exhibition is accompanied by a diverse program of films, music and literature. An authentic Viennese coffee house will welcome visitors on the museum’s lower floor. An additional Art Shop will present a special selection of Viennese products.