Design ON OFF is an event that from September 23-26 highlights Swiss contemporary design that is fun, brazen, clever and mostly on sale. Renens, a suburb of Lausanne where écal, the university of art and design is located, becomes the hub of a 3-day event that extends to 22 satellite venues from Morges to Lutry and now draws international design celebrities.

Contemporary furniture design has a reputation for being impractical and often outrageous, but Design Days, organized for the past four years in Lausanne by the magazine Espaces Contemporains showcases work by exciting young designers who marry functionality with innovation.

“In the beginning, we were crying in the wilderness,” says Patricia Lunghi, artistic director of Design Days since the event was launched in 2006.

“We were intent on demonstrating that design is not just an industrial product submitted to business rules, but the result of thoughtful research on the use and functionality of an object.”

“The creative process in design is not dissimilar to one in art,” Lunghi maintains.

The design scene in Switzerland has changed profoundly in recent years, she emphasizes, a trend in which Lausanne has played an increasingly important role.

Écal, the university of art and design, spills out world class talent, and mudac, the museum of contemporary design and applied arts, showcases their work.

“These two institutions have become great visiting cards,” she says of design poles that are piloted respectively by charismatic leaders Pierre Keller (who will be succeeded when he retires shortly by one of the current star designers, Alexis Georgacopoulos) and ChantalProd’Hom.

The choice of Renens, a western suburb of Lausanne, as the base for this year’s Design ON OFF edition is due to a partnership with écal located in a former stockings factory converted by ‘starchitect’ Bernard Tschumi three years ago.

Écal will be organizing a bazaar to sell off prototypes created by its students since 1996 for famous design houses, including Serralunga, B&B Italia and Eternit AG. This may be a fabulous opportunity to pick up a rare piece for a bargain at galerie ELAC, from 1pm to 9pm on all three days.

Look out for fun purchases at the écal bazaar

“Design ON OFF is an event that ties together the different aspects of design today,” Lunghi explains.

“We work with a large constellation of showroom partners that present well-known brands.”

A circuit stretching from Morges to Lutry that also stops at all the showrooms in Lausanne will be connected by a free shuttle bus.

Highlights include exhibitions organized especially for the Design Days. Moyard in Morges has invited 14 contemporary artists and designers to occupy 2,000 square metres, including INCHfurniture, that contributed to the Swiss pavilion at the Shanghai universal exhibit.

Batiplus in Lutry, the ultimate chair specialist present the new ultimate Philippe Starck chair for Kartell. The impish French designer has fused the styles of ultimate chair icons, Serie 7 by Arne Jacobsen, the Tulip Armchair by Eero Saarinen and the Eiffel Chair by Charles Eames to produce the Masters, a feat of technology that is more comfortable than it looks (see right).

Espace Saint François (ESF), at the heart of Lausanne, currently hosts an exhibition of seven young designers that is wonderfully playful, including works by Lifegoods, a favourite of this reviewer.

“Our work is also to bring the public’s attention to the work of bright new designers,” Lunghi continues.

Recent works by 20 confirmed or rising stars will give an instant idea of the remarkable vitality of design in Switzerland today.

Berlin-Go has designed a beanbag that is cleverly structured so as not to collapse in an amorphous and annoying heap (see above).

Francis Chabloz comes up with the most extraordinary shapes to objects that never lose their initial function. His Shark ceiling lamp, that he says was inspired by ‘Jaws’, emits a gentle light that is becoming in all circumstances (see below).

Claudio d’Amore, who founded the successful Cosanova firm that is active in luxury goods, including high-end watches, has taken a huge leap with his Kosha chair (pictured in lead to article).

Boris Dennler is the guy behind Boris Lab whose imagination produces objects pulled out of recycled materials, like his chair constructed from old radiators. 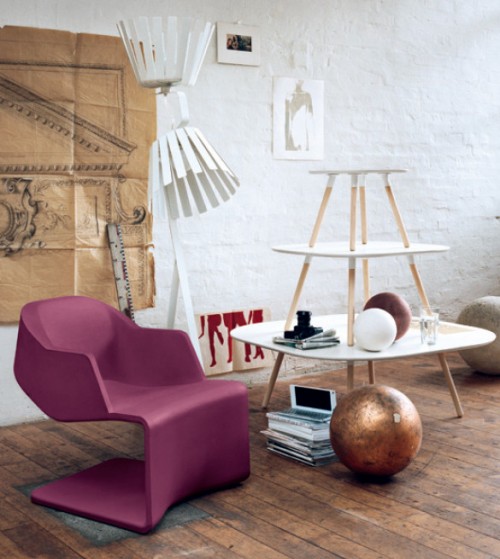 Not skipping a beat, one of Switzerland’s largest furniture stores has created Atelier Pfister that commissioned many of the young Swiss designers who are stepping into the big league (see complete programme).

Several of the commissioned works that have now been industrially produced and put on sale are present in Renens, including by louise blanche, aka Sibylle Stoeckli and Nicolas Lemoigne, names to look out for as their smart and elegant furniture pieces are the answer to a lot of space problems.

Alfredo Alessi, CEO of the eponymous firm, will be one of the star attractions of the event, not least because he is a very entertaining speaker, as well as leader of one of the most successful design companies of all times.

He will give a talk on Friday, September 24 on the theme of ‘Architects and the design of objects’ at Archizoom, located at EPFL, the Swiss federal institute of technology at Dorigny.

The loud colours and oriental-baroque designs of Bojka make a refreshing change in the world of interior design today.

“Many designers work at the frontier of design and art,” Patricia Lunghi repeats. “We want to make that zone visible.”