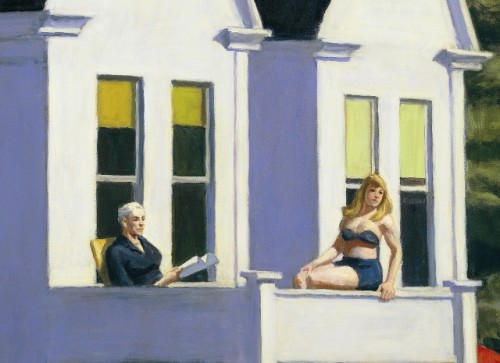 American painter Edward Hopper – whose spellbinding scenes of nighthawks, usherettes and New England house fronts are part of our collective consciousness – is the subject of a key exhibition at the Hermitage Foundation in Lausanne. Drawings, water colours and engravings are presented alongside several familiar paintings, offering a rare insight into an artist who used his paint brush as a camera for the invisible.

Edward Hopper (1882-1967) is one of the best known American painters on this side of the Atlantic.

His enigmatic scenes of ordinary people frozen in unfinished stories continue to strike a popular chord and are the subject of exhibitions in museums around the world.

“But we didn’t want to present yet another Hopper retrospective with a collection of his iconic pieces,” explains Juliane Cosandier, director of the Hermitage Foundation in Lausanne, where the show takes place until October.

“Our aim is to highlight the relationship between Hopper’s drawings and his painting in a way that also shows his evolution as an artist,” she adds.

Over 160 works spanning Edward Hopper’s entire artistic career are on display, from his beginnings as an illustrator in the early 1900’s to one of his later works, the potently sexual, A Woman in the Sun, 1961 (pictured below) painted when Hopper was 79.

The bulk of the exhibition is from the large Hopper estate entrusted in 1968 to the New York Whitney Museum of American Art by Hopper’s widow, Jo, who outlived her husband by only a year.

Juliane Cosandier tells Swisster that she was able to obtain additional pieces for the Hermitage from private collectors, “and not the least significant,” she promises.

Curated by Carter Foster, the Whitney’s curator of drawings, the exhibition, except for the works shown only in Lausanne, was assembled by Arthemisia, an Italian company that tours and delivers art shows. The present one was first shown in Rome and Milan before arriving Switzerland.

It opens with a first section dedicated to the engaging self-portraits that Hopper painted over a period of 40 years and that reflect his reserved demeanour.

His wife Jo, whom Hopper met and married when they were both past 40 years of age, was to say of her husband’s introversion that “sometimes talking to him was like throwing a pebble in a well, except that you wouldn’t hear it hit the water.”

The next three sections overview Hopper’s early works as an illustrator, his three trips to Paris and his successful career as an engraver.

During his times in Paris between 1906 and 1910, the art scene was vibrant with revolutionary shows by Picasso and Cézanne, but Hopper later confessed to not having been aware of them.

One of the few painters of the 20th century who never even flirted with abstract art, Hopper was always interested in the generation of artists who had preceded his, especially Manet and Degas.

“The upright to the left that anchors the painting of Soir Bleu (pictured above) is in fact a compositional trick that Hopper borrows directly from Degas,” says Carter Foster.

Hopper continues to use the trick of visual obstacles, either vertical or horizontal, throughout his art, an intriguing characteristic to look out for in the works on display at the Hermitage.

“As in all his large paintings, simplicity is subverted by a mysterious disquiet,” Foster indicates. Soir Bleu was painted several years after Hopper returned from Paris.

“It’s a memory of France, a mental suggestion,” Foster points out, a method that Hopper was to apply to all of his paintings.

“Memory is the intangible and tacit subject of most of his works, which contributes to their impression of ambiguity,” he emphasizes.

“It took me ten years to get over Europe,” Hopper was quoted as saying. He never returned to France, although he remained a Francophile throughout his life.

Back in the United States, Hopper only started earning a living from his painting in the early 20s, when he was already 40 years old and had just met Jo. 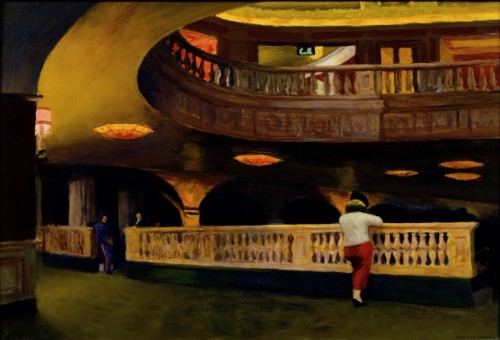 Although he was frequently associated by the critics to the ‘American Scene Painting’, characterized by the direct and simple illustration of Americana, Hopper declared that the movement “makes a caricature of America. I just wanted to do things my own way.”

He remained unmoved by the explosion of abstract art during his lifetime and never deviated from his line of pictorial realism infused with solitude and uncertainty. “It is the alliance between realism and illusion that gives his work its singular power,” says Cosandier. 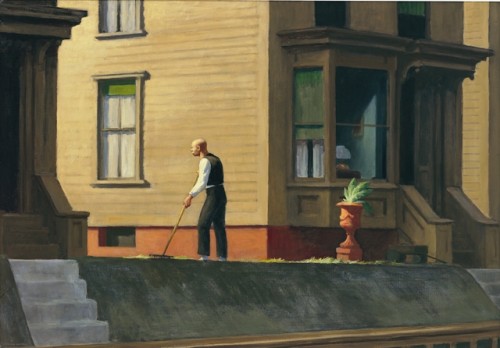 The fifth section of the exhibition is like a mirror into the mind of the quiet and austere man. We understand how the elaborate sketches by which he designs his large scale paintings are just a way for the artist to move away from reality.

For Morning Sun, Hopper starts by drawing his wife, who was to become his only model after their marriage.

“In the progressive sketches, Jo’s traits disappear to become a mask,” Foster observes.

Hopper admitted that the human figure was not what interested him most. “All I wanted to do was to paint sunlight on the side of a house.”

Pointing out how Hopper’s scenes regularly represent exteriors and interiors at the same time, Foster suggests that the elaborate compositions “keep the spectator on the outside”, which in turn contributes to a disturbing impression of voyeurism.

“Although he is perceived as a hyper-realist, Hopper is not trying to paint reality. He is in fact inventing his own pictorial logic,” Foster insists.

For instance, shadows in a number of his paintings are totally incoherent, which subtly accentuates their eeriness. 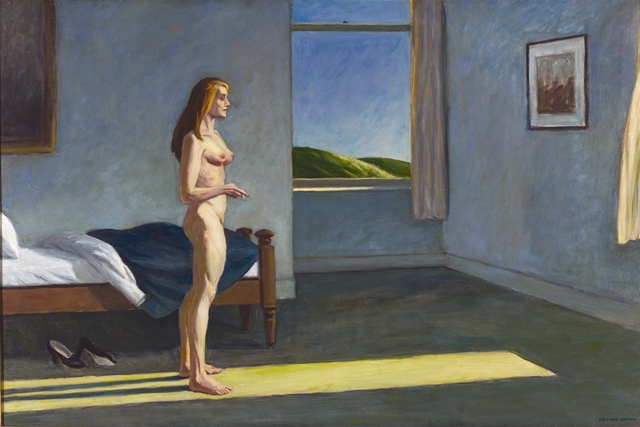 A final section concentrates on illustrating Hopper’s relationship to the key elements in his work: time, place and memory.

“My aim in painting has always been to transpose with the greatest precision my intimate impressions of nature,” Hopper explained, adding famously “If you could say it with words, there wouldn’t be any reason to paint.”

The exhibition is accompanied in Lausanne by a programme at the Swiss film archive (Cinémathèque) between June 30 and August 14 that brings to light the strong links between Hopper’s compositions and filmaking, an industry that was simultaneously coming into its own.

“Hopper’s use of light and his keen sense of framing introduced an extraordinary and novel theatricalization of pictorial spaces, which in turn inspired many filmmakers,” Cosandier suggests.

Quotes originally in English have been translated back from their French versions in the catalogue and may be different from the originals.