Swiss artist Christoph Büchel pushes hyper-realism to an unexpected extreme by inviting a real life sex club to become an integral part of his exhibition at the Secession gallery in Vienna, home to Gustav Klimt’s Beethoven Frieze that sparked a sex scandal in its own time. Büchel’s provocation sends shock waves through political bodies responsible for the public funding of art, including in Switzerland.

The Secession museum, an architectural turn-of-the-century Viennese art nouveau gem, has become the repository of a sex scandal. But not for the first time. When Gustav Klimt unveiled his Beethoven frieze in 1902, it was considered depraved and obscene. It is now regarded as one of the twentieth century’s masterpieces. 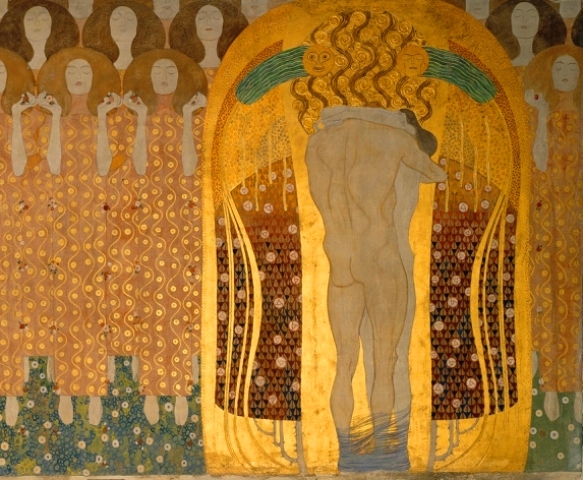 As a reminder of the public outrage fuelled by Klimt’s audacity, the artist Christophe Büchler has chosen to go a step further. He has invited a sex bondage club to occupy the Secessionist building. By day visitors straddle mattresses strewn with sex paraphernalia to view the wall-mounted panels that show Klimt’s haunting and even disturbing nudes.

As a result, the public funding bodies in Austria and Switzerland are coming under political attack. In Austria the far-right Freedom party, founded by the deceased Jorg Haider, are shouting their indignation, although the Secession answers calmly that Elements 6 is financing its own activities.

In Switzerland, the incident adds insult to injury for the Swiss People’s Party that is still seething from a project early 2005 at the Swiss cultural centre in Paris by Thomas Hirschhorn, another Swiss artiste provocateur. Hirschhorn’s send-up of the party’s then leader, Christoph Blocher, resulted in a massive cut in funds for Pro Helvetia, the government’s art subsidizing body.

Silvia Bär, the SPP’s deputy secretary general, states emphatically that “it is not the state’s responsibility to finance projects like these with tax payer’s money.” Fifteen thousand Swiss francs were attributed to the project by Pro Helvetia.

The Secession museum is known for its “openness for experimentation”. But the current exhibition (until 18 April) may be more than it bargained for. The museum is being besieged by hungry journalists from different parts of the world, despite the fact that the artist has dictated a press blackout.

Dr. Annette Südbeck, the Secessionist curator who helped Bächler set up the show, agreed however to an interview.

“We believe in artistic freedom and in allowing artists to develop their own projects,” she explains. “What B!uchler has done in our museum is in keeping with what he had done in other venues, so we are not really surprised.”

Even the brass letters that elegantly adorn the entrance to the museum with the famous Secessionist motto “To every age its art. To art its freedom” has been changed by Büchel to “Art is art. Freedom is time”.

Christoph Büchel, a 43 year-old Swiss artist from Basel whose hyper-realist environments have dismayed, intrigued, repulsed or stunned audiences in different parts of the world is arguably better known abroad than he is in his own country. His current show at the Secession museum confirms his reputation as a firebrand who invites controversy.

“The notion of reality is very important to the artist which is why he uses a naturalistic approach in all of his works,” Südbeck says.

Despite being highly conceptual, Büchler’s installations invariably call for active participation. Recently he partially transformed the Fridericianum gallery in Kassel Germany into a discount supermarket where real bargains could be picked up.

And if Christoph Büchel’s name means something to North Americans it is because his massive project, “Training Ground for Democracy”, for the Massachusetts Museum of Contemporary Art (commonly known as “Mass MoCA”) has ended in a high-profile on-going legal dispute.

Tired of waiting for the artist to complete the project, the museum decided to expose part of it to the public. When Büchler obtained a court order to oppose the decision, the museum simply dismantled the entire work.

In one of two projects for the Artists | Biennale of Sydney 2008 Büchel obtained that real life inmates from Australian prisons serve as the guards of his exhibition at the Museum of Contemporary Art located precisely where the ‘First Fleet’ of prisoners from England came ashore in 1788.

The main excitement of Christoph Büchel’s work, wrote Ken Johnson in the New York Times on the occasion of a construction at the Swiss Institute in 2004 “is the Alice in Wonderland feeling of entering a mysteriously eccentric and possibly nonsensical parallel universe”.

“The reason Büchel withholds or obscures information about his work is that he wants people to find out for themselves. He is looking for pure responses,” Südbeck stresses.

Unusually however, Pro Helvetia has issued a statement that indicates “Art is supposed to raise critical questions and sometimes to trigger controversy . . . Christoph Büchel has long been known for highlighting double moral standards, and he does so in the current exhibition, too.”

“But this project doesn’t insult anyone. The artist is only testing our levels of tolerance,” Knüsel maintains.