‘Vague, but exciting’, three words that unleashed the web

20 years ago, almost to the day, Timothy Berners-Lee wrote a memo that laid the premises of what was to become the web. ‘Vague, but exciting’ is how Mike Sendall, his boss at CERN, recognized the proposal. But today, Berners-Lee is more interested in the potential that the web has yet to unlock.

’I wrote the information management proposal 20 years ago, but 20 years ago nothing happened’ said Berners-Lee during the www@20 celebration organized on March 13, 2009 at the CERN . ‘Sendall gave the go-ahead and allowed me to purchase a NeXT machine, but it was a wink, rather than a nod. The project only took off when random people got involved and that’s what was so exciting.’

The ‘random people’ who were to make history with Berners-Lee were all present at the anniversary meeting. And what a bunch of kids they have remained. Their juvenile enthusiasm and spontaneity remains intact after all these years, bringing the day’s Master of Ceremony, Laurent Haug, the Director of Lift Conference whose idea the celebration was, to remind them during the official proceedings that they could perhaps reserve their noisy reminiscing for the post-event dinner party…

Ben Segal, often referred to as Berner-Lee’s mentor, was the first to speak. He admits that he still does not understand the “picture” that Tim submitted to Mike Sendall. At the time, he was the Cern’s Internet Coordinator. He remembers Berners-Lee saying ‘People just need to agree on a few simple things.’ The miracle, he says, is that people did, ‘just enough to make it work.’

He added ‘The web was created at Cern, but from its weakest point and using underground resources. What Tim was doing was tolerated, but he had vision and perseverance, and he had the tools.’

Berners-Lee invented a way to easily share and search electronic documents by presenting texts and images in a universal format. When the coding language, HTML (Hypertext Markup Language) was combined with a URL (Uniform Resource Locator) users could access the documents independently of the systems that their computers were working on.

Cailliau and Berners-Lee. Demo of the NeXT computer on which the Web was developed, Photo Maximilien Brice 13.03.09 © Cern

Without Robert Cailliau two things might not have happened: the necessary resources for the research to be pursued might never have become available and the web might not have remained free. Cailliau was the Head of Office Computing Systems at CERN when Berners-Lee made his proposal. He became a tireless lobbyist and had the foresight to keep the web in the public domain. As Berners-Lee acknowledges, ‘if there had been royalties, the web would be dead’.

‘Of all the decisions that you made at the time, are there any you regret?’ asked Haug. Berners-Lee had to think a while, but admits that the colon and double slash, as in http:// (for Hypertext Transfer Protocol) were not ideal. He would also have reversed the denominations, as in ch.swisster instead of swisster.ch .

As for the name of world wide web, it was chosen by Berners-Lee because he wanted people to share their information with the world and because he deliberately wanted to stay clear of the Greek mythology after which so many scientific projects seem to be named. Zeus, Odyssey or Mercury were not for him. 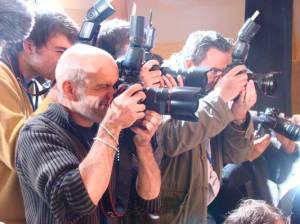 ‘The danger of celebrations is to look back and forget that we are only at the beginning of the web’ said Berners-Lee who refers excitedly to its ‘unlocked potential.’ He is convinced that the linking of the huge masses of random data that are out there will allow for unsuspected discoveries.

In a recent TED talk, he gave the example of the development of new drugs to treat Alzheimer due to the linking of two unrelated databases, one on genomic profiles and the other on proteins.