By becoming an Associate Partner to Art Basel and launching a programme of commissions for artworks by emerging or mid-career artists, the luxury Swiss watchmaker Audemars Piguet casts an invitation to contemporary art.

Making its mark on the three annual editions of Art Basel – Hong Kong in March, Basel in June, Miami Beach in December – Audemars Piguet commissioned French designer Mathieu Lehanneur to imagine its booth inside the art fair’s Collectors’ Lounge. His response, a setting that dovetails technology and design, confirms the watchmaker’s choice.

Lehanneur, whose business card reads “Since 1974”, admits to a weakness for projects that send him into the great unknown. He immediately felt in phase with the watchmaker’s values, adding “I don’t think values are there to be broadcast, just quietly observed. Like love, actions count more than words. I wanted the booth to illustrate the contrast between the harsh, rugged landscape of the Vallée de Joux, and the calm, concentration and sophistication of the watchmaking ateliers.”

The result is a peaceful, enigmatic environment that seems almost out of place in its art-market surroundings. Yet Lehanneur is convinced his design isn’t that far removed from the intentions that inspired the creators of the Royal Oak, who put the gold inside the watch, not on the outside. He believes Audemars Piguet has understood that art can help greater self-awareness and, in this instance, that it can also tie the watchmaker even more strongly to its origins in the Vallée de Joux rather than Geneva, the city with which the brand is more readily associated.

A film titled Measure, commissioned from Austrian video artist Kurt Hentschläger, is permanently screened on one of the walls of the booth. Its images play on the sense of eternity that emerges from the Jura mountains, and reinforces the identity of the brand as being rooted in the region.

One major work a year

Audemars Piguet could easily have contented itself with a financial partnership with this most prestigious of art fairs, and capitalise on its media presence. Instead, it has made it a springboard from which to explore new directions.

Beginning in 2015, each year it will commission a major art work that will be shown at the three international locations of Art Basel on a rotating basis. The sole condition is that the work “will emphasise the visual and conceptual expression of complexity, precision and creativity.” In other words, that it should reflect on how art relates to the watchmaker’s art. As well as financial support for the project, the brand will provide access to the advanced expertise and technology required to bring it to fruition.

Accordingly, it has set up an Art Commission that will oversee the process and select artists. Each year, this commission will be headed by an internationally renowned guest curator. First to take on this role is Marc-Olivier Wahler, who is known for the bold choices he makes for the Chalet Society, the nomad exhibition structure he has created, and while he was director of Palais de Tokyo in Paris. 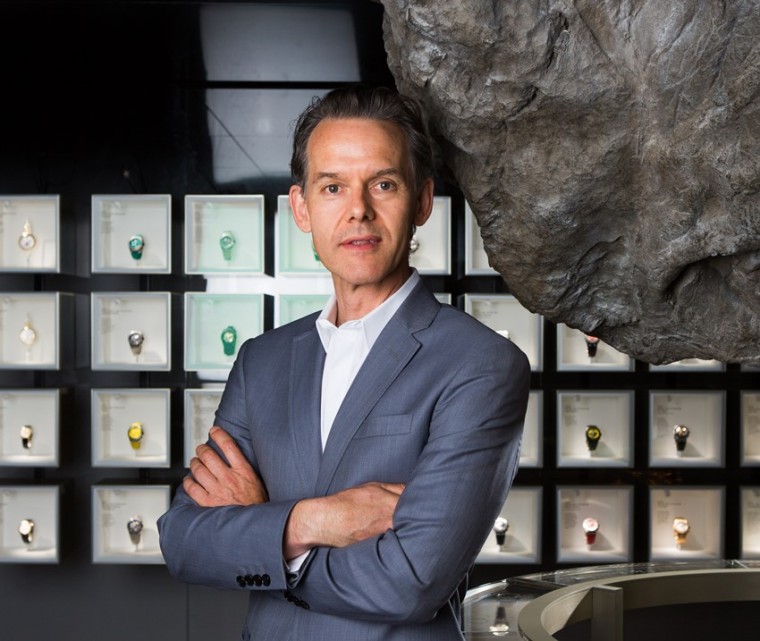 Wahler, who was born in Neuchâtel and lives between Paris and Los Angeles, has already staged more than 400 exhibitions worldwide. Asked about the dialogue between watchmaking and art which must emerge from this collaboration, he commented that “in both cases, an incredible expertise vanishes into the wings. Ultimately, a beautiful watch is like art. Its value lies not in the visible but in what it contains.”

Invited by Audemars Piguet to visit its ateliers in Le Brassus and observe its watchmakers at work, Wahler was fascinated by one in particular who produces nothing but grandes complications: “It takes him nine to ten months to assemble the seven hundred components, another month to take them apart, two more months to assemble them again, another month to take them apart, and so on. In this respect, an artist is like a grandes complications watchmaker: both aim for perfection and after a certain time, at the end of a long process, they stop.”

He has already drawn up a mental list of twelve artists whom he believes could benefit from this collaboration, but refuses to take the easy option, namely to choose one who has already produced a monumental work under the aegis of an established gallery. In his mind, that an extraordinary project should be allowed to exist thanks to Audemars Piguet’s initiative is nothing less than a contribution to art history.

“This isn’t a shot in the dark,” emphasises Jasmine Audemars, who is the great-granddaughter of one of the founders of Audemars Piguet, and chairwoman of the board of directors. “There is a logic, a parallel between watchmaking and contemporary art, a vast amount of creativity and innovation. We spent some considerable time reflecting on how we could bring together two areas with so much in common.” She went on to add that a great many collectors of grandes complications watches are also interested in contemporary art, concluding that “we want to bring into being works that wouldn’t have existed without us.”