Drugs and creativity: the creative schizophrenia of Aloïse

Aloïse, a major figure of art brut, also known as outsider or raw art, produced all her phantasmagoric drawings during her long internment for schizophrenia. Had the Swiss artist received medication for her illness, it has been suggested that she might not have produced anything at all. 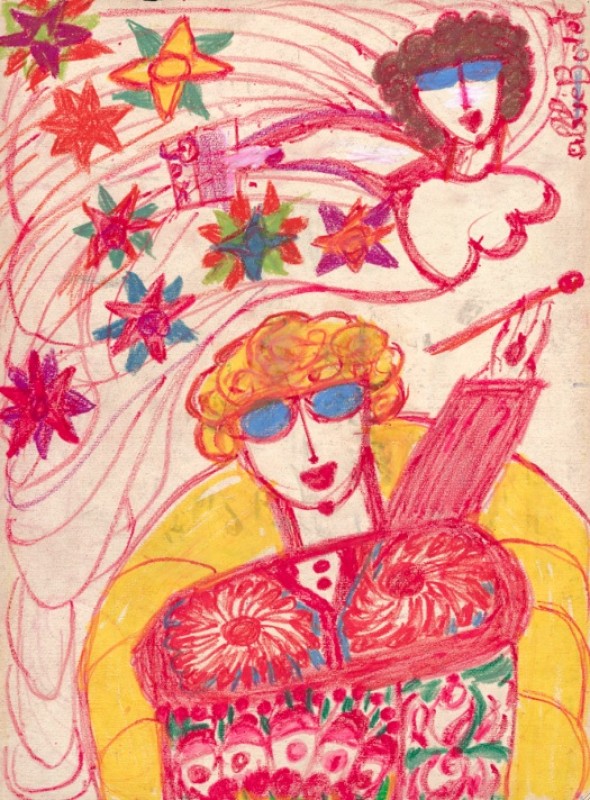 Article published on http://www.swissinfo.ch on 13 August, 2012: The creative schizophrenia of Aloïse

On the occasion of two key exhibitions dedicated to Aloïse this summer in Lausanne, the question of whether her creativity would have survived modern medication has surfaced.

Antipsychotic drugs and antidepressants relieve the distress of innumerable individuals, but they can also be responsible for switching off creative drive.

The debate has taken on new relevance since the publication of a scientific study that establishes a correlation between schizophrenics and highly creative individuals. Low levels of dopamine receptors allow more uncommon associations to take place in their brains.

Interned for schizophrenia at the age of 32, Aloïse for the next 46 years exorcised her torment by dreaming up a world of her own that she transcribed in notebooks and drew on sheets of paper.

“It is unlikely that Aloïse would be institutionalised today,” Pascale Marini, curator of the exhibition taking place at the Collection de l’Art brut told me. She would have been medicated instead and therefore deprived of the protected environment that ultimately allowed her art to flourish.

Aloïse had begun to draw almost immediately after her internment in 1918, at first secretly on bits of salvaged paper, where she also consigned her unruly thoughts. She was gradually supplied with the colouring pencils and large sheets of paper that would allow her to make her hallmark drawings. 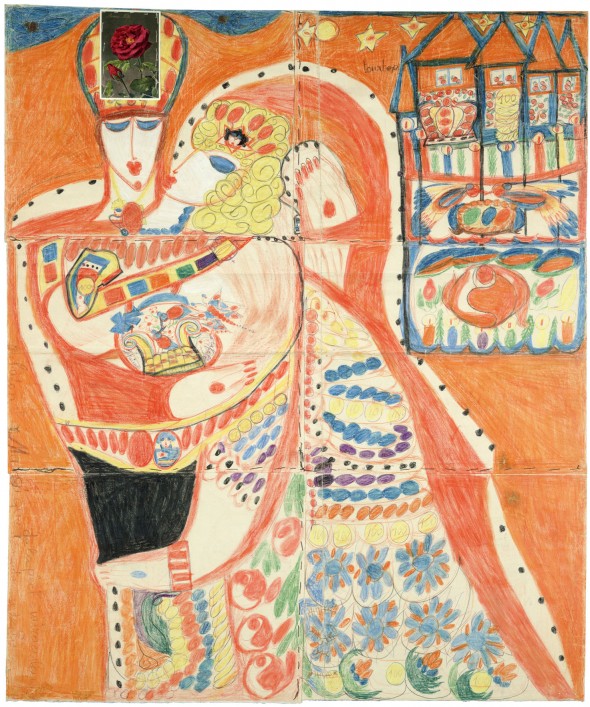 “She created a world for herself in which she was the demiurge, the total artisan. It was a perfect retreat,” Marini explained. By showcasing this world in the exhibition, the purpose is not to illustrate Aloise’s schizophrenia, she added, but to show the role of creativity in allowing people like her to deal with their torment.

Aloise herself qualified creativity as “miraculous”, “the only source of perpetual ecstasy.”

Jean Dubuffet, the French painter behind the concept of art brut, had been following her work for almost 20 years and often visited her in Switzerland. Upon her death in 1964, he expressed the opinion that her art had cured her (see below).

It was Jacqueline Porret-Forel, a young general practitioner interested by Aloïse who had introduced her work to Dubuffet. He immediately recognised the singularity of her mental vision, an observation that was to inspire him when he later identified other art brut creators.

Porret-Forel was to become Aloïse’s window to the outside world from their meeting in 1943 onwards and may even have acted as a catalyst to her explosive creativity over the next ten years.

“She could feel my interest in her,” Porret-Forel told me during a long interview in her living room filled with Aloïse drawings. 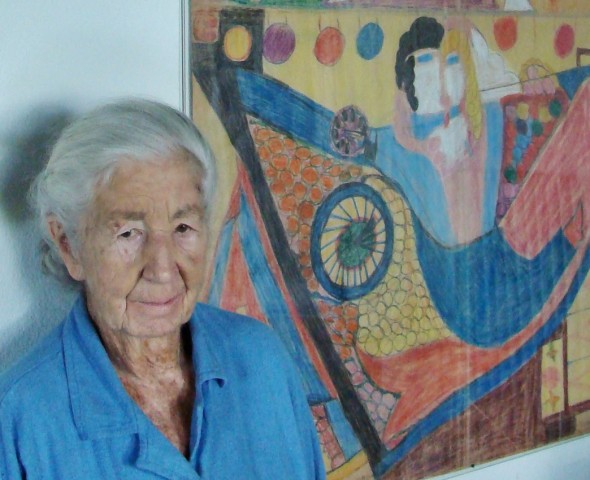 Spearheading Aloise’s recognition, including as far as Japan, where several Aloïse exhibitions have already taken place, Porret-Forel is also the author of the recently online-published catalogue raisonné. After all these years, at the age of 96, her enthusiasm for Aloïse remains as fresh as ever: “She keeps me going,” she observed with a smile.

“She wanted more than anything else to be incarnated in her drawings. It was a way for her to exist, to regain possession of the body from which she felt detached,” Porret-Forel recalled. “She was never happier than when the flower or animal that she had just drawn represented her.” 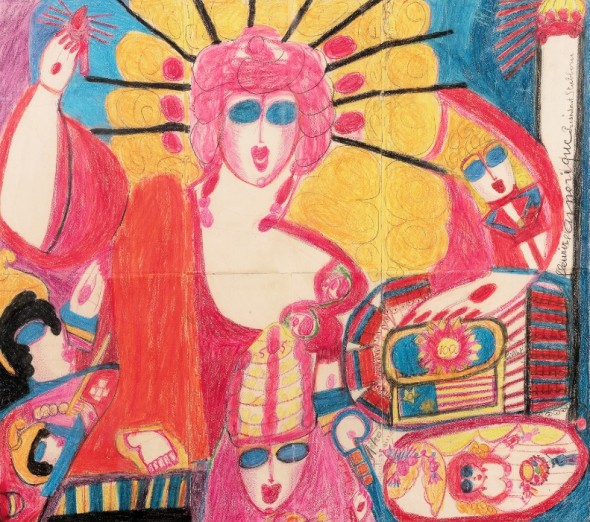 She too is convinced that Aloïse would have led a very different life had she been administered the antipsychotics that had been available from the 1950s onwards. “Antipsychotics completely transform inner worlds,” she said.

Aloïse would have drawn differently, if she would have drawn at all, elaborated Porret-Forel, although, as a doctor, she believes that there is little justification to deprive anguished individuals of the relief that medication can bring them.

This opinion is not necessarily shared by all. Edvard Munch, painter of the “Scream” famously said “[My troubles] are part of me and my art.  They are indistinguishable from me, and it [treatment] would destroy my art.  I want to keep that suffering.”

The case of Aloïse is however somewhat different, Porrt-Forel suggested, because she believes, as Dubuffet did, that her exceptional gift helped heal her.

“What I have observed over the years, including by studying the writings of Jean Dubuffet, is that art brut is made by individuals who have a mental – not visual – vision of the world.” These can include mediums.

They lay their mental images on whichever support is at hand. This one-way process is entirely different from that of traditional artists who work back and forth between what they see and what they have created. In this respect, art brut is not to be confused with art therapy either.

Asked whether modern medication would not sound the knell of art brut, she answered that because it is not a movement, but a concept: “There will always be people with personal mental visions that differ from ours.”

–      On the occasion of the online publication of a catalogue raisonné of Aloïse’s oeuvre, compiled by the Aloïse Foundation, two Aloïse, The Solar Ricochet exhibitions are being jointly presented by the Collection de l’Art Brut (until October 28, 2012) and the Cantonal Fine Arts Museum of Lausanne (until end August 2012). 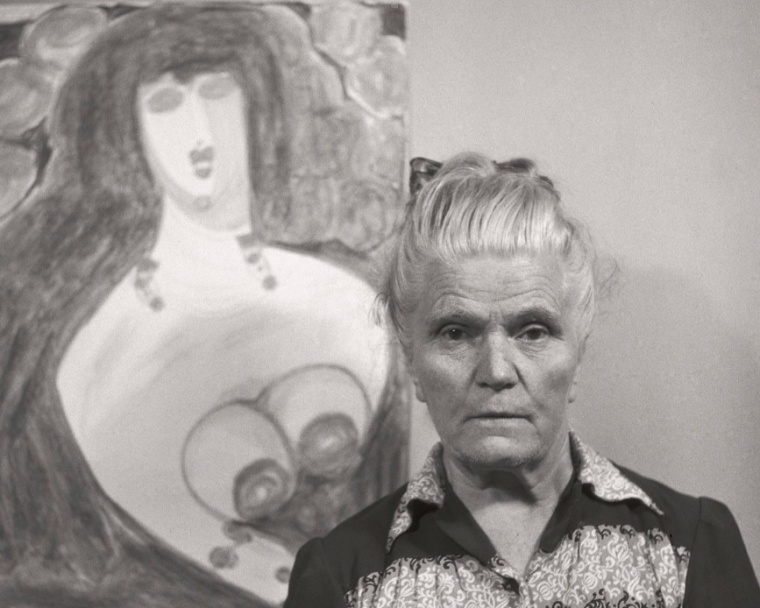 –      Due to the exuberant symbolism of her large-scale drawings, Aloïse is considered one of the three major figures of art brut, along with Swiss compatriot Adolf Wöflin and American Henry Darger.

–      Aloïse Corbaz (1886-1964) was born in Lausanne. She dreamt of becoming an opera singer, but was sent off to Germany as a children’s governess, where she worked in Potsdam, at the court of Emperor William II. Upon returning to Switzerland in 1913, she began her anti-military ranting and adopted delusional behaviour. She was interned for schizophrenia in 1918 and remained interned for the rest of her life.

–      Aloise drew with coloured pencils, reinforcing the contours of the drawings with graphite pencils. She used geranium petals to add rich reds hues and frequently added toothpaste to her drawings. Towards the end of the 1950s, she switched to wax crayons when her eyesight began to decline.

–      There are 834 known drawings by Aloïse containing 2,000 compositions. Many of the works are two-sided and 20 are on large rolls of paper. The exhibitions in Lausanne showcase about 300 works, including sketchbooks.

“I am convinced that she was perfectly lucid and that she simply retreated into the ingenious cocoon that she had made for herself… Schizophrenic? No, surely not. She was perfectly in control. The careful orchestration of her pictures, their assurance, their virtuosity do not fit the image that they might have been made by … a madwoman.”

Letter from Jean Dubuffet to Jacqueline Porret-Forel, April 11, 1964, following the death of Aloïse.

–      Art brut, a term coined by French artist Jean Dubuffet, designates the production of highly creative individuals like Aloïse who, due to their mental isolation, are untainted by cultural conditioning.  They use art to escape their torment by expressing their inner worlds.

–      Dubuffet bequeathed his extensive collection of 4,000 art brut works to Lausanne in 1971. The Collection de l’Art brut was opened two years later in the Château de Beaulieu in the city center. It has become the world mecca of art brut.

–      A study by the Swedish Karolinska Institute, published in March 2010, has established a correlation between the action of dopamine in individuals capable of divergent thinking, i.e. considered to be creative, and schizophrenics.

–      Schizophrenics and highly creative individuals have been found to have fewer dopamine receptors, particularly of a subtype D2. Their absence of filtering contributes to a higher flow of information.

–      A higher flow of information excites the cerebral cortex, leading to an increased ability to make novel connections and uncommon associations.