Photos that expose “The Other America”

In the wake of the 9/11 commemorations, three major contemporary American photographers present unfamiliar and intriguing images from the United States.

Emotion, power and nostalgia are the distinct themes presented in three parallel exhibitions under the collective title, “The Other America”, at the Musée de l’Elysée in Lausanne.

By revealing the paradoxes of their homeland with images of sometimes brutal beauty, Frank Schramm, Saul Leiter and Mitch Epstein show us a different America.

The photographic language of the artists whose works fill Switzerland’s premier photography museum could not be further apart. But they share a sharp sobriety and elegance that challenges the divide between documentary photography and art.

“These three exhibitions encourage us to question our attitudes towards the US,” Elysée Director, Sam Stourdzé, said at the opening.

Frank Schramm was in New York on September 11, 2001. But rather than chronicle the event, he stepped back to portray those who were on the frontline of the news delivery. Over the following weeks, he photographed the TV presenters who provided the news in an endless loop.

Segregated in an area on the West River at some distance from the cordoned-off Ground Zero, they became the “stand-ups” reporting the live events that they themselves were not allowed to see.

“Photographing the journalists became my way of dealing with my own emotions,” Frank Schramm told swissinfo.ch. “In my emotions, I was wondering how they were dealing with theirs.”

The resulting portraits, many of which have the glossy perfection of a fashion shot, have never been shown publicly before this year. None carry any names, although many of the portrayed presenters are well known.

“This work is not about the journalists. It’s not about who they are. It’s about: can a tragic event bridge towards art,” Schramm observed.

Pauline Martin, who curated the show, explained that the journalists, as they became the mediators of a nation’s collective trauma, were also unwittingly contributing to the success of the terrorist act by amplifying the media coverage.

“The series serves as a manifesto: terrorism cannot exist without the major role played by the media and the images they broadcast,” she insisted. Press fortunes and careers are made overnight by disasters.

“Life goes on, we move forward. I wanted to remember what we were feeling,” Schramm recalled.

Under the provocative and ambiguous title, “American Power”, Mitch Epstein documents the massive reliance of the US on unlimited amounts of energy.

From 2003 to 2008, Epstein crisscrossed the country in search of the installations either in use, or abandoned, that have contributed to the “power of America”.

“He uses an artistic approach to tackle important social issues,” Stourdzé said of Epstein, whom he considers to be one of the most important photographers today.

“By looking at the larger American landscape and identifying the sites that produce energy, I watch the story between communities, corporations and the government unfold,” Epstein explained, adding, “This work is a reflection on American culture at this time.”

He said that he was not an environmental activist, but that he realised that America takes a lot for granted. “We were handed a lot and we expect a lot. This has created a sense of entitlement.” 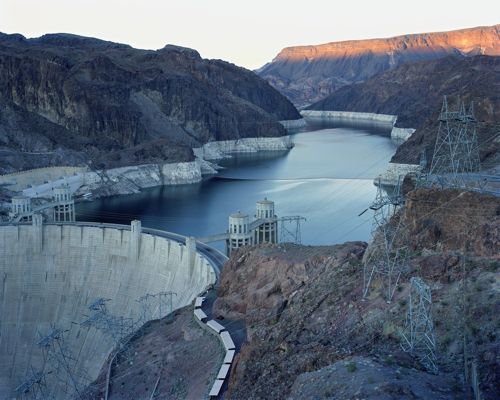 Politics are the driving agenda, according to Epstein. Workers who have contributed to the might of the nation become renegades when the power plants are abandoned or relocated. He sets out to tell their stories too.

“My pictures are complex because I want to produce a metaphorical narrative of things American and compress as much as I can into a single image,” he said.

It is not without irony that his panorama includes images of lakes once used to cool off nuclear power plants and that have now become leisure areas, mostly for immigrant workers.

The 65 pictures of scarred landscapes have a stand-alone perfection that makes them almost abstract. We are looking at a country’s destructive reliance on energy, but at its optimism as well.

Photography is a language, Epstein stated. “It is my job to use that language in all its fluency.”

Sam Stourdzé, who curated the third show in a theatrical display that occupies the entire third floor of his museum, presented the works of Saul Leiter, too aged to be present.

Leiter, born in 1923, first trained as a painter before exploring photography. He discovered “street photography” by visiting the exhibition of Henri Cartier-Bresson at MoMa in 1947 and from there on began to photograph his environment. But he was less interested in scenes, than in capturing fragments of scenes.

“His early attempts in black and white were fairly ordinary, but when he switched to colour, his eye as a painter and a colourist took over,” Strourdzé explained. Images become compositions, each one the beginning of a story.

“Leiter plunges us into a nostalgic America of the Fifties,” Stourdzé explained. “He is sharing his solitary moments of reverie.”

It is precisely the poetic dimension of The Other America that allows a documentary exhibition to emerge as art. Stourdzé is convinced that “visual narratives can transform the way we look at things”.

This is the first time the pictures have been shown in Switzerland.