“Silo 8”, the latest show by the cult Swiss-German Karl’s kühne Gassenschau, packs in crowds of all ages with its distinctive mixture of adventure, comedy, music and fireworks. An abandoned quarry near Aigle serves as an open-sky theatre for adventures that are wild and funny, with no need to understand the words.

With Monty Python humour, Wallace & Gromit poetry and Barnum and Bailey antics, the Karl’s kühne Gassenschau produces delirious shows for all audiences in the most unexpected places.

The troupe, started 25 years ago and still run by the four founding members, is the living proof that the Swiss can be imaginative, irreverent, outrageous and funny.

With its spoofy title – “Karl’s kühne Gassenschau” means “Charles’ bold street show” – the company has presented more than 2,000 performances before a million people over the years without ever losing its initial vitality.

The latest production, Silo 8, describes the hilarious attempts by a pack of oldies to escape their futuristic retirement home. The abandoned quarry of St Triphon (visible from the motorway) near Aigle serves as the dramatic backdrop for their frantic frolics.

“After shows on the themes of traffic congestion and water, we wanted to do something on air and flying,” says co-founder Ernesto Graf, “but the idea developed into a metaphor for escape.”

“Because they are confined to retirement homes and to their aging bodies, we thought that old people would make the perfect candidates for a tale of escape,” he adds.

The show spins the clock forward by 40 years and takes us to 2050 where the elderly are packed off to silos in the “autumn of their lives”.

“Silo 8” is the kingdom of the terrifying Dr. Wolf who rules with an iron hand and bouncing iron legs. The first thing he does when the pensioners arrive is to “free them of their past and nostalgia” by pumping the memory out of their heads.

But the love between Alfredo and Aurora, a frail and darling Italian couple remains. It serves as the poetic anchor of the show, while the four other pensioners go wild.

“Our old-age pensioners aspire to become as light as air,” explains Brigitte Maag, who together with Paul Weilenmann, invents the imaginative scenarios. They also direct and play in all the shows.

“We start by making a series of sketches to give the show its visual force. Then master technician Markus Heller, who is also one of the founding members, makes the prototypes with his team, while Neil Filby writes the musical backbone.”

With an imagination worthy of Monty Python’s Terry Gillian in his landmark film Brazil, weird and wonderful machines carry the action and make the scenes unforgettable.

In an atmosphere halfway between a circus and a rodeo, we assist wild chases on motorized wheelchairs, human car-washes with the pensioners hanging in mid-air and meals delivered straight into their gullets by petrol pumps.

Inventive and lively music by Neil Filby, a Brit who has been with the company since 1994, and who plays with three other accomplished musicians, paces the show and serves as its emotional cement. They make up the Pheromones (catch a sample on their website). 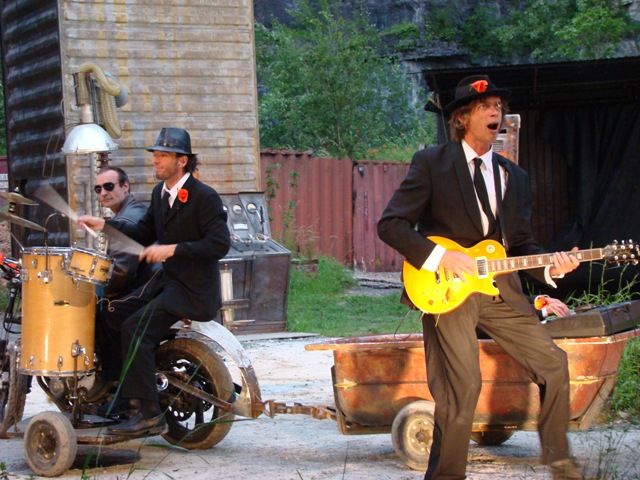 “The actors then give life to the show. As always, improvisation is part of our creative process,” indicate Magg and Weillenmann.

The whole thing could be terribly camp and cruel, especially when dealing with the sensitive subject of old age. Who wants to see decrepit oldies prancing on a stage?

But rest assured: the caricatures are so outrageous that they are never mean. The pensioners are having such a good time that they forget their arthritis and so do we. 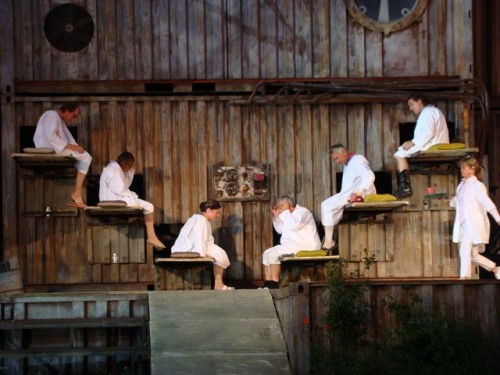 Good Morning, nurse Jessica get the pensioners out of their locker beds, photo Laird

“Take in a good breath,” says Jojo the rebel rouser to his accomplice Pierrot. “This is the smell of liberty!” he declares enthusiastically before discovering with disappointment that their great escape has failed once again.

But it all comes together and the final scene alone – with its intense poetry – is worth the trip to St. Triphon. 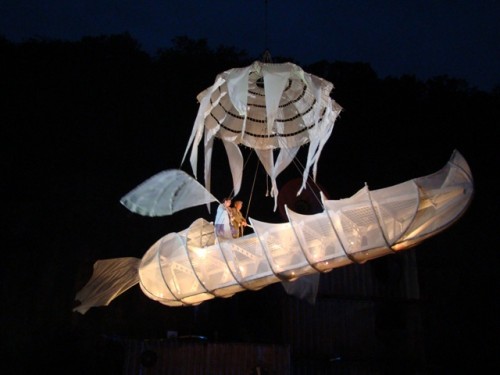 “We like to play out of doors because we like grand images in big open spaces,” the artists declare, “and we like to play with earth, water and fire.”

Although the audience is comfortably protected from the weather on bleachers covered by an awning, the actors play come rain or shine. “We are constantly flirting with danger,” they admit.

The result is slapstick comedy with a sweep of tenderness and the exhilarating danger of a tightrope act.