Jean-Michel Basquiat was the New York artist of meteoric fame who befriended Warhol and Madonna and died in 1988 of a heroin overdose at the age of 27. For the 50th year of his birth, the Beyeler Foundation in Basel pays tribute to the shooting star and his riotous and incandescent art. A complex artist in a league of his own, his paintings now reach unimaginable prices.

A major retrospective of the short-lived Jean-Michel Basquiat has just opened at the Beyeler Foundation in Riehen, a suburb of Basel. It runs until September 5 with 150 works on loan from collectors and museums around the world.

“This is the most complete retrospective of Jean-Marie Basquiat, the first large exhibition ever held in a European museum,” announces Samuel Keller, director of the Beyeler Foundation “because it has all the major works from the different periods of his work.”

An American artist of Haitian and Puerto Rican descent, Jean-Michel Basquiat was a musician, actor, poet, draughtsman and painter who created incessantly and who took the US art scene by storm in the early eighties.

Already in the late seventies at the age of 16, under the pseudonym of SAMO©, he and Al Diaz sprayed aphorisms on the walls of Manhattan, feeding the mystery of their poetic anonymous identity.

In a documentary showing Basquiat painting live in New York (1981) we discover the intense language-orientation of his work when we see him write the absurd “Origin of cotton”, “Braille teeth”, “For whole livery line bow like this with the big money all crushed into these feet” on the barren surfaces.

By then, he had also begun to paint on canvasses and was to produce over eight years – before his death in August 1988 from “acute mixed drug intoxication” – about a thousand paintings and more than two thousand drawings, many of which are still in private collections.

His friend Mary Ann Monforton reported in an interview that “Basquiat painted on anything he could get his hands on: refrigerators, laboratory coats, cardboard boxes, and doors.”

When the legendary art dealer Jeff Deitch first visited him in 1980, he saw “a battered refrigerator that Basquiat had completely covered with drawings, words, and symbols, the lines practically etched into the enamel,” adding that “it was one of the most astounding art objects I had ever seen.”

“His art is about mixing imagery with words, signs and symbols to create a very powerful and energetic message about living in New York in the 80s,” comments Keller.

Basquiat experienced his major breakthrough at the age of 20 in 1981 when a large group of his paintings were presented at the influential P.S. 1 in Long Island City in a show entitled “New York/New Wave”, that also included works by Keith Haring and Robert Mapplethorpe.

Keith Haring, whose jubilant little figures and understanding of street culture were also to make him an art icon before his premature death from AIDS at the age of 32, said of Basquiat: “He had to live up to being a young prodigy, which is a kind of false sainthood.”

The sudden stardom was to make Jean-Michel Basquiat a cult figure, and the first Afro-American artist to gain international recognition.

He was to become the symbol of the effervescence and excitement of New York City in the eighties, along with Madonna, with whom allegedly he had an affair.

Represented worldwide, except in the US, by the Zurich gallerist Bruno Bischofberger, Basquiat travelled widely and visited Switzerland a total of 14 times.

As early as 1983, Ernst Beyeler, who had not yet built his museum, included Basquiat in a landmark exhibition, significantly entitled Expressive Painting after Picasso, alongside Joan Miró, Jean Dubuffet, Willem de Kooning, and Jackson Pollock and chose the artist’s now famous painting Philistines (below) to illustrate the catalogue cover.

In the States, Basquiat joined the recently created and immensely successful Mary Boone Gallery, who was the unlikely protégé of the influential Leo Castelli.

“He was a hypersensitive artist who absorbed everything around him,” says Samuel Keller, highlighting the fact that Basquiat’s art ran counter to the conceptual and minimal art that was the consensus in the art world at that time.

The exhibition in Basel covers the distinguishable periods of Basquiat’s oeuvre, from painting on canvases to using rough materials as painting supports. It fills ten rooms of the Beyeler Foundation, with some of the walls adorned like a wild mosaic.

One of the periods was dedicated to a close collaboration with Andy Warhol. 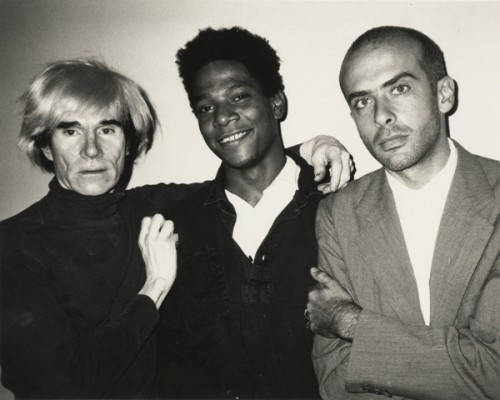 Sandy Naime, the author of “State of the Arts”, Channel Four documentaries on modern art in 1986 said of the collaboration: “Warhol and Basquiat have made art out of what few others would dare, a defacement of each others’ paintings. In each of these enormous neo-pop epics, Warhol begins with his choice corporate logo writ large. Enter Basquiat who blocks out the boss’s images or scribbles all over them.” Watch the 1986 documentary.

As Keller comments: “He was able to mix expressive painting with pop art.”

Basquiat brought Warhol to paint again and Warhol brought Basquiat to use serigraphy in his art, but the collaboration was ended abruptly by Basquiat in 1985 when a show of joint works was panned by the critics.

In his next and what was to be his final period, Basquiat increasingly concerned himself with the subject of death.

The painting Riding with Death (below), borrowed from a book on Leonardo da Vinci, was according to the curators to become “an icon of the artist’s own death and provide fruitful soil for the growth of his myth”. 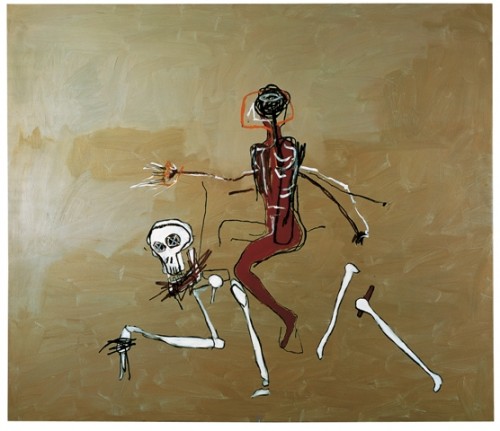 The myth of Basquiat continues to this day, with the corollary that the value of his works continues to rise.

Untitled (Boxer), that was sold at a Christie’s auction in New York in 2008 for 13.5 million dollars to an anonymous private collector is included in the show.

“Putting it together has been the result of my entire professional career,” says Keller, of the difficulty to locate and secure the loans.

A Basquiat documentary, co-produced by Swiss collector Maja Hoffmann, entitled “The Radiant Child”, after “the most famous image by Basquiat’s friend Keith Haring”, is scheduled for release this summer.

The exhibition, curated by Dieter Buchhart and Sam Keller, enjoys the support of the estate of Jean-Michel Basquiat, New York. It was conceived in collaboration with the Musée d’art modern de la Ville de Paris, where it will be on view from October 15, 2010 to January 30, 2011.