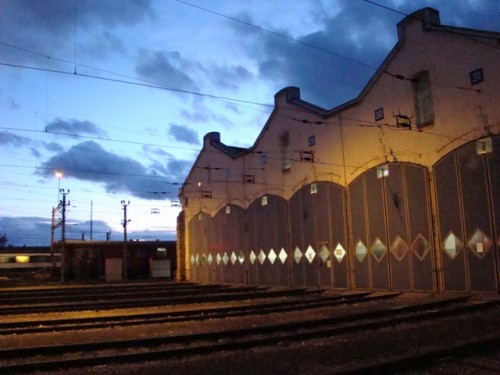 A disused locomotive hall in the centre of Lausanne has been chosen as the venue for the new Fine arts museum, Vaud canton and Lausanne city authorities officially announced on Wednesday. The anticipated bonus for the choice of the site will be a complete rethink of the adjoining Lausanne railway station and its connections. Renowned art collections have been promised to the museum when it finds a new home.

When a popular referendum in November 2008 buried the project for a lakeside Fine arts museum in Lausanne, few people would have placed their bets on a new project resurfacing in record time, so acrimonious were the debates that led to the defeat.

But with dumbfounding speed for Switzerland, a committee reviewed 11 additional sites – 19 had already been considered – in seven different locations, including aggressive bids by the towns of Morges and Yverdon and decided that the site of the locomotive hall, which borders the Lausanne train station, was the obvious choice.

“This location is an extraordinary metaphor for what culture should be: accessible, at multiple crossroads and ambitious,” said Anne-Catherine Lyon, the Vaud cultural minister. She was only one of the many officials, including Pascal Broulis, president of the Vaud state council, who expressed their approval for the site.

The locomotive hall comprises two parts and covers close to 10,000 square metres (or one and a half international soccer pitches). The first section, closest to the Lausanne station, was built a century ago and bears witness to a style of industrial architecture that cities the world over are now attempting to preserve.

“Because of its sheer volume, a place like this is a headache when you don’t know what to do with it, but an opportunity when an option becomes clear,” said Laurent Staffelbach, the Swiss federal railways real estate portfolio manager who is unofficially attributed with the idea of housing the museum in the soon-to-be abandoned depot.

Other examples abound, like the Hamburger Bahnhof in Berlin and the Musée d’Orsay in Paris, both museums that draw crowds as much for their content as for their architecture. But the site in Lausanne is the only one next door to a major transportation system still in operation.

“The Swiss federal railways own large swaths of property throughout the country, often in prime urban locations, but we need to make better use of them,” explained Staffelbach.

Furthermore, the project could very well speed up plans to adapt the Lausanne train station, which can no longer cope with the large quantity of persons who use it every year – currently evaluated at 35 million – and the increasing number of trains needed, especially to ensure the service with Geneva.

Daniel Brelaz, Lausanne’s mayor, added that the current project was a win-win situation for all concerned. “We get a 99-year rent-free lease on the depot and in exchange, the railways are allowed to develop other plots of land, for instance the huge wasteland in Malley, to the west of Lausanne”. It is a money-less transaction.

The cost of the transformations has not been confirmed but is expected to be similar to the budget allocated to the construction by the lake, which was last pitched at 70 million francs.

Bernard Fibicher, the current director of the Fine arts museum will continue in his role as artistic caretaker and cultural visionary. He will secure the promised art collections and define the content of the new exhibition space.

Fibicher will be working closely with the enfant terrible of Swiss cultural politics, Pierre Keller, the current director of the Lausanne University of Art and Design (ECAL).

Keller will head the promotion and fund-raising teams. Never to hide his thoughts or look for words, Keller has already announced that this museum will be mythical, a success story “not only for Lausanne, but for the world”.